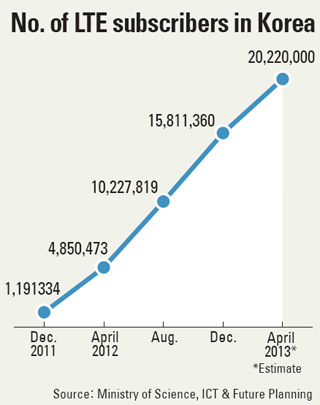 The number of Long Term Evolution (LTE) smartphone users has surpassed 20 million in Korea, with 37 percent of 53.75 million mobile phone subscribers and 58 percent of 34 million smartphone owners using the network.

The 20 million milestone comes 21 months after the launch of LTE network service.

The three telecommunications companies announced earlier this year a goal of more than 30 million LTE users by the end of the year.

With the current trend, however, industry sources say the number of LTE users could exceed 30 million much sooner than that.

By enabling wireless high-speed Internet access and allowing smartphone users to use multimedia services, it has become common for users to watch videos or listen to music in real time.

On the other hand, the share of 3G subscribers decreased from 67.6 percent in December 2011 to 50.5 percent a year later and 46.4 percent in February.

Meanwhile, the number of LTE subscribers increased by an average of 40,000 a day despite a government crackdown on all three mobile carriers for offering excessive subsidies.