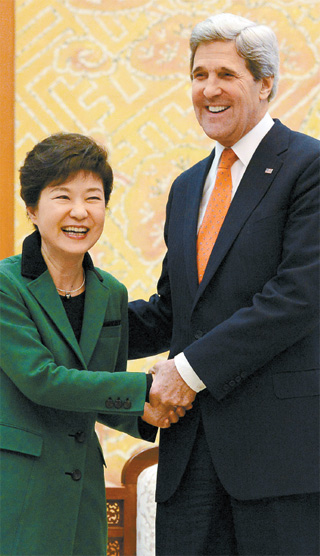 Seoul and Washington softened their tone toward Pyongyang by urging the communist regime to start dialogue, in an apparent move to prepare an exit for North Korea from the boiling crisis caused by its bellicose threats.

A sign of change was first seen in Seoul on Thursday, when President Park Geun-hye stressed her intention to calm the escalating military tensions through dialogue.

“We must use the Korean Peninsula trust process,” Park said, referring to her North Korea policy. “We will talk to the North.”

The remarks were made during her dinner with lawmakers on the National Assembly’s foreign affairs and unification committee and defense committee.

“To this end, the unification minister has issued a statement,” Park was quoted as saying by a lawmaker.

“The Kaesong Industrial Complex must be normalized through dialogue,” he said. “To discuss what North Korea wants, the North Korean authority should come to a negotiation table.”

He also issued a ministerial statement and urged the North to act responsibly.

Seoul’s offer for inter-Korean talks came on the eve of U.S. State Secretary John Kerry’s visit to the country. Kerry arrived here yesterday and met with Park at the Blue House as the world is bracing for yet another missile test by the North.

After firing a long-range missile and conducting the third nuclear test earlier this year, the Kim Jong-un regime has ratcheted up its scathing rhetoric against Seoul and Washington. South Korean and U.S. officials said a missile launch, capable of reaching the U.S. territory Guam, is imminent.

During their meeting, Park explained about her vision of trust-building with North Korea, Kim Haing, Blue House spokeswoman, said. “We will strongly retaliate against a North Korean provocation, but we will build trust and achieve mutual development when the North decides to change and come out to a talk,” Park was quoted as saying.

Kim said Kerry expressed support for Park’s North Korea policy, calling it a wise plan to change the pattern from the past for rewarding Pyongyang’s bad behavior.

The Park-Kerry meeting took about two hours, significantly longer than originally planned. Kerry, then, met with his South Korean counterpart Yun Byung-se and addressed the media at a joint press conference.

“North Korea must stop its reckless actions and respond to the South Korean government’s efforts to build trust through dialogue,” Yun said. “It is up to North Korea to make its choice.”

Stressing the United States, South Korea and the international community won’t accept the North as a nuclear power, Kerry warned Pyongyang not to make a mistake by launching a missile and fuel an already volatile situation.

He also stressed that Washington is trying to resolve the situation through dialogue. “Our hope is we can get back to talks,” Kerry said, adding that the United States is open for six-party talks and bilateral dialogue with the North, if Pyongyang is serious about giving up its nuclear arms.

He also said U.S. President Barack Obama has ordered a number of unspecified exercises not to take place, stressing that Washington has significantly tried to lower its rhetoric.

Calling Park’s trustpolitik a vision for negotiation and peace, Kerry said he will also deliver the position to Beijing when he visits China today.

Before her meeting with Kerry, Park also met with NATO Secretary General Anders Fogh Rasmussen at the Blue House. At the meeting, Park once again urged the North to change.

“If the North takes the path for change, we will build peace on the peninsula and Northeast Asia through our trust process,” Park was quoted as saying by Lee Mi-yeon, presidential spokeswoman.

Signs of change were also seen in the U.S. approach toward Pyongyang.

U.S. President Obama said Washington wants diplomacy to dissolve tensions on the Korean Peninsula, urging the North to stop its brazen threats against the United States and its allies.

“Nobody wants to see a conflict on the Korean Peninsula,” Obama was quoted as saying in the pool reports after his meeting with UN Secretary General Ban Ki-moon at the White House.

“We both agreed now’s the time for North Korea to end the kind of belligerent approach that they’ve been taking and to try to lower temperatures.” Obama said.

“We will continue to try to work to resolve some of those issues diplomatically even as I indicated to the secretary general that the United States will take all necessary steps to protect its people and to meet our obligations under our alliances in the region,” Obama said.

It was the U.S. president’s first public comment on Pyongyang’s latest saber-rattling.

Throughout last month, the United States, responding to the North’s nuclear threats, was engaged in a show of force which included a dazzling array of sophisticated weapons like the B-52 strategic bomber, the B-2 stealth bomber and the F-22 Raptor stealth fighter.

The mood, however, changed this month. The Pentagon canceled a plan to reveal the F-22s to the media and delayed a test of intercontinental ballistic missiles. Washington also planned to make public Kerry’s visit to the Korea-U.S. Combined Forces Command yesterday, but abruptly canceled it.

It remains to be seen if North Korea will respond to Seoul’s offer for dialogue.