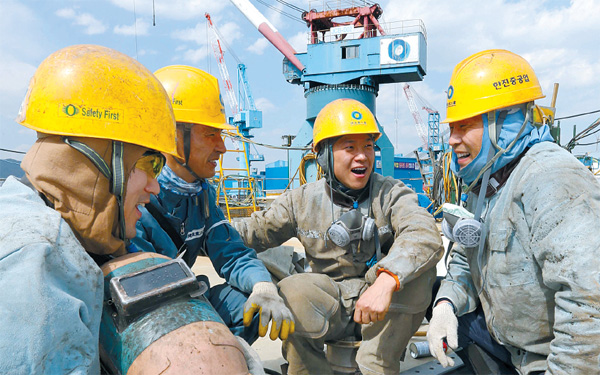 Workers of Hanjin Heavy Industries and Construction chat on Thursday during a break as they heard the news that the company won its first bid to build ships in five years. By Song Bong-geun

“We are members of a new labor union of the Hanjin Heavy Industries and Construction. We promise you that in close cooperation with the company, we will deliver your products at the highest quality at the requested time without labor disputes,” said Kim Sang-wook, who heads a new labor union of the shipbuilder company, in a letter sent on Feb. 24 to four shipping companies: Hyundai Merchant Marine, SK Shipping, Hanjin Shipping and STX PanOcean.

The letter, sent while the four companies were searching for shipbuilders to construct nine 150,000-ton bulk ships to transport coal overseas for thermoelectric power plants, was intended to ease worries among industry watchers over Hanjin’s old aggressive labor union, which has frequently made headlines in recent years for its fierce opposition to Hanjin’s labor restructuring plan.

In signing a letter of intent with Hyundai yesterday, the Busan-based shipbuilder will gear up to build ships around June this year.

The contract is reportedly worth 150 billion won ($132.9 million), as each of the three bulk ships costs 50 billion won to be built.

Industry watchers say Hanjin’s first order in five years is a result of joint efforts put forth by the company and the labor union, both of which had intense conflicts over labor issues in recent years as it has had no shipbuilding contracts.

Labor union head Kim Sang-wook made a number of visits to related government offices to ask for assistance in winning a contract starting this year, as well as sending a letter to the shipping companies.

The company followed suit by coming up with a better design model of a ship at cheaper price than what other shipbuilders offer to ship owners.

“We actually had multiple opportunities to win a contract, but we missed every one due to the negative sentiment toward Hanjin, because of the previous hard-line labor union,” said Kim.

The new labor union leader added he was able to send letters to the shipping companies as new union members have badly “wished Hanjin would go back to work.”

Sending a pleading letter by the labor union two years ago was unthinkable under the strike-prone labor union managed by the Korean Confederation of Trade Unions.

A high-profile protest atop a 35-meter (38-yard) shipbuilding crane waged by labor activist Kim Jin-sook for 309 days did not help the company normalize its operations.

Hanjin workers at a shipbuilding yard in Busan Thursday did not hide their delight to hear that a deal was made for the first time in five years.

“Everyone here is very encouraged by the new contract. I hope my colleagues now on unpaid leave because of lack of work can come back to work,” said Hanjin worker Jung Soon-hak.