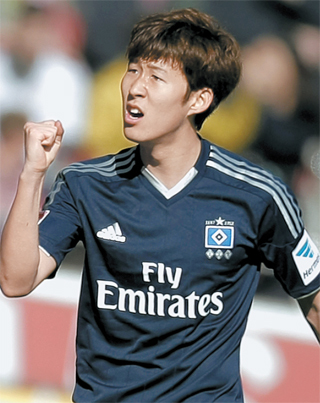 Hamburg’s Son Heung-min celebrates his goal during the German Bundesliga match between Mainz 05 and Hamburg SV on Saturday. [AP/NEWSIS]

Son Heung-min has become the first Korean in 27 years to score double-digit goals in Bundesliga as his two goals against Mainz 05 on Saturday brought Hamburg SV closer to a spot in next season’s Champions League.

Hamburg beat Mainz 05, 2-1, at the Coface Arena in Mainz thanks to the 20-year-old Korean’s 61st-minute and 81st-minute goals. The host team pulled one back on Shawn Parker’s goal in the 86th.

With the goals, his 10th and 11th of the 2012-13 season, Son has become the second Korean to score double-digit goals in a season in the German league after Cha Bum-kun, former manager of the Suwon Bluewings.

Cha, now 59, recorded double-digit goals in a season six times during his 11-year stint in Bundesliga between 1978 and 1989. Cha’s record for goals in a season is 17, when he played for Leverkusen in the 1985-86 season. Son has five games left to break that record.

Saturday’s goals moved Son up to eighth place on Bundesliga’s list of the season’s top scorers. He scored five goals last season and three in the 2010-11 season.

Including all European first-division leagues, Son is the fifth Korean to score double-digit goals in a season in Europe. Seol Ki-hyeon had 13 goals when he played for Anderlecht of Belgium in the 2002-3 season, while Park Ji-sung had 11 goals for the PSV Eindhoven in the Dutch league in the 2004-5 season. Park Chu-young had 12 goals for AS Monaco in France in the 2010-11 season.

The goals ended his scoring drought, which began after he scored twice against Dortmund on Feb. 9. It was the third time this year that he scored multiple goals in a game. He also scored two goals in the season’s fourth game on Sept. 22.

With Son’s help, Hamburg also snapped a three-game losing streak. The team is now eighth in the league with 41 points. It is tied with seventh-place M’Gladbach and trails sixth-place Frankfurt by one point. The six best Bundesliga teams clinch a berth to next season’s Champions League.

Bayern faces Wolfsburg in the German Cup semifinals on Tuesday and coach Jupp Heynckes rested nine of his usual 11 starters. But the new Bundesliga champion, which sealed the title last week, dominated the Bavarian derby from the start and ended Nuremberg’s run of nine matches without a defeat.