Can Psy do it again with new tune?

Can Psy do it again with new tune? 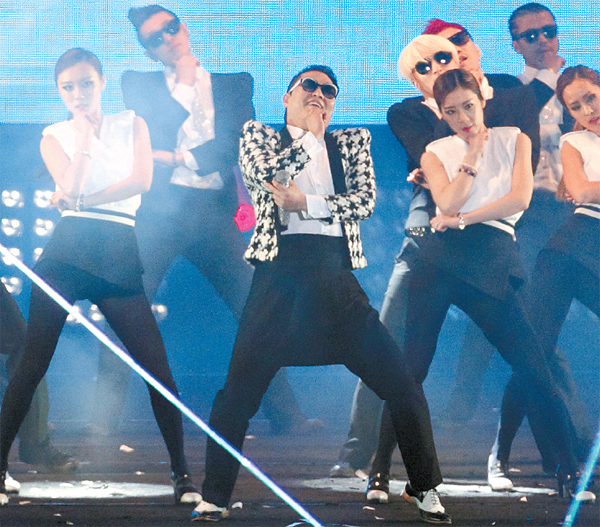 Under considerable pressure, Psy trotted out the follow-up to “Gangnam Style” on Saturday in front of 50,000 at Seoul World Cup Stadium in Sangam-dong, western Seoul.

Titled “Happening,” the show was significant not only because it cost 3 billion won ($2.65 million) to put on, but it was also the unveiling of his latest single “Gentleman.”

The music video for “Gentleman,” which was released during the concert and online at the same time, had more than 10 million hits on YouTube as of 2 p.m. yesterday.

Prior to the performance on Saturday, Psy took time to talk about his new release with some 130 domestic and 30 foreign members of the media.

“As you have guessed, the choreography in the video is the ‘Abracadabra’ dance,” Psy said.

“But I have a different body shape, so it’ll be different.”

Psy said he chose Brown Eyed Girls’ dance from a few years back to further get the word out about Korean pop culture.

“I hope to remake a lot of existing Korean songs and dances and promote them abroad. I think Korean dance possess a lot of unique moves that will do well overseas.”

“The reason I came over to see the concert is more so because what I think it means, because music is a universal language for the next generation,” said Braun, who flew in from Los Angeles with his friend, director Jon M. Chu behind “G.I. Joe: Retaliation.”

In defense of the Hallyu star that the media has been quick to label a “one-hit wonder,” Braun insisted, “that wasn’t the point.”

“He made a song that made people happy. The world was going through a recession at the time .?.?. he did something to help Korean people, but he ended up putting smiles on people’s faces around the world.”

Although it may be too early to measure the overall success of the piece, Time magazine did say that “fans of pelvic thrusts” would love the catchy tune with its electronic beat.

About the new music video for “Gentleman,” Jeff Benjamin, a K-pop columnist, wrote on Billboard’s Web site, “At times, the video looks a bit like a behind-the-scenes look at ‘Gangnam Style.’ But that doesn’t make it any less entertaining.”

Despite the criticism and even if the song flops, Psy said it wasn’t important.

“I gave it my best in the time frame, so I’m very happy.

“Seriously, since when was I ever an international star? And because ‘Gentleman’ is loved here, it doesn’t matter how it does elsewhere,” explained Psy.

Following the press conference, the show ran a little later than planned, but the fans didn’t seem to mind.

Those who turned up in white, as requested by the “Gentleman,” seemed to have no problem as they waved their white glow sticks around.

After Psy made his grand entrance, he wasn’t alone onstage for long as YG Entertainment artists, including 2NE1, Lee Hi and G-Dragon, took turns performing their own songs, making the show feel like a YG Family concert.

With comments like “Republic of Korea!” shouted out intermittently during the show, the 35-year-old rapper proved just why he was such a sensation in his home country.

“I was always a fan because he’s so passionate,” said Kim Sun-jin, one fan who turned up with a friend for the first time to check out his latest song.

Meanwhile, another fan Cho Sung-in who turned up head-to-toe in white said although she was “a little bit embarrassed,” that it was “well beyond” her expectations.

“Someone asked me, why hold the first showcase here in Korea?” Psy said as the night went on.

For the next several hours, the patriotic star who rose to stardom after 12 years of playing the underdog in his home country, kept his fans enthralled, whether he was suspended in air or covering Beyonce’s “Single Ladies.”

Just when fans thought they had seen it all, the shirt came off of the star who has said he was “happiest when making others happy.”