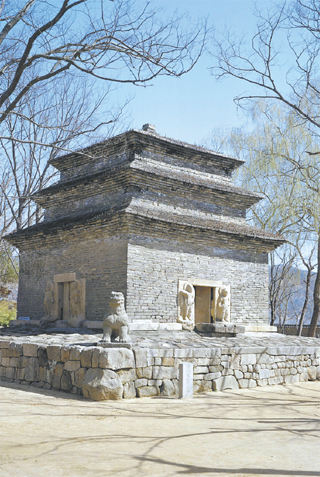 This is the oldest remaining stone pagoda of the Silla era. It was built in 634, the third year of Queen Seondeok’s reign. Records say the pagoda was originally nine stories tall, but only three stories remain today.

In 1915, it was repaired by the Japanese and otherwise left intact. At the time of restoration, workers found many items inside, including a casket and beads.

The pagoda stands on a wide single-story platform made of stone, and a granite lion carving sits at each of the four corners. The body of the pagoda is made with piles of small brick-shaped stones trimmed from black andesite. The huge first-story core has gates on each side, and each gate has an inwangsang (safeguard statue) that protects the Buddhist canon. The statues are considered the highlight of the structure for their strong and soft expressions. As such, the pagoda is deemed a masterpiece through which we can see the carving styles of seventh-century Silla. On top are carvings of lotus flowers in full bloom. This pagoda is often compared with the stone pagoda at the Mireuksa Temple site (National Treasure No. 11) that was also built in the seventh century. However, that treasure is built in the wooden pagoda style reflective of the Baekje era.