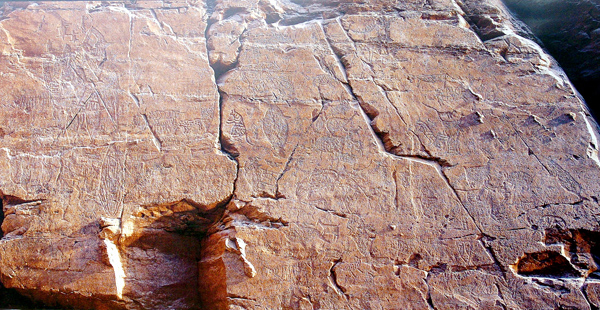 The Bangudae petroglyphs weren’t easy to see with the naked eye, but the nearby scenery is breathtaking.[JoongAng Ilbo, NEWSIS]

ULSAN - A ghost whale (a western gray whale) carrying its baby on its back. A turtle swimming with its feet reaching out. And a tiger sitting with its long tail hanging down.

It’s hard to decipher the 300 drawings of prehistoric animals, humans and hunting tools on the famous Bangudae petroglyphs here in the southern part of the peninsula. But it’s not impossible. The whale, the turtle and the tiger were all there to be found, after all. Locals say one can get a good look at the petroglyphs as the sun shines on the surface of the rocks.

Last week, the Cultural Heritage Administration took a group of journalists and experts to this relic that has a strange fate of spending eight months a year underwater. Some Korean media have dubbed it “water torture,” to show their disapproval and lament over the situation.

The CHA (the central government) and Ulsan Metropolitan City (the local administrative government) have been at odds over what to do with the Bangudae petroglyphs for more than a decade now. While the former wants to lower the water levels, the latter wants to build an artificial dike, saying lowering the water levels will reduce clean water supplies to its residents by enough water to supply 18,000 homes.

The CHA argues that an artificial dike will not only cause damage to the petroglyphs in the construction process but will also eventually alter and ruin the surrounding nature. All this, the CHA says, will lower the chances of the Bangudae petroglyphs becoming a Unesco World Heritage Site. For that reason, the organization is encouraging Ulsan officials to secure water sources from elsewhere.

So, why do these 8,000-year-old petroglyphs spend up to eight months a year submerged? It’s because of local water policies put in place after the construction of the Sayeon Dam in 1965. 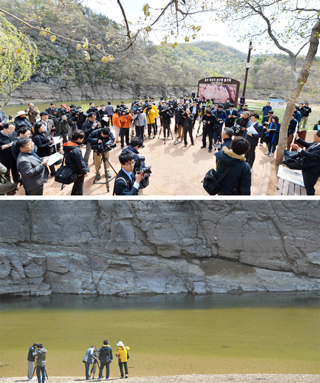 From top, Journalists toured the area where the Ulsan mayor lashed out at the central government’s preservation plans. Twenty-four percent of the surface is believed to be damaged. [JoongAng Ilbo, NEWSIS]

The petroglyphs, which were found in 1971, measure 10 meters (33 feet) wide by four meters high. They feature about 300 sea animals, such as different types of whales, and other mammals such as tigers, wolves and deer, and hunting tools. Experts say they are likely the oldest petroglyphs that portray mankind’s whale-hunting activities.

Agree to disagree at historic site

For the past month or so, it appeared the Cultural Heritage Administration’s proposal lowering water levels seemed to be winning.

On March 15, President Park Geun-hye who reportedly has a special interest in the Bangudae petroglyphs appointed as the head of the CHA Byun Young-sup, an art historian who has been fighting for their preservation for more than a decade and calling for lowering the water levels.

Immediately after becoming the head of the CHA, she met with journalists to promote the organization’s stance and handed out her name card with a drawing of the Bangudae relic on it. She also promised to arrange a special visit to the area for journalists and experts, and formed a special task force for Bangudae.

Earlier this month, Ulsan mayor Bak Maeng-woo met with some of the Ulsan-based lawmakers of the ruling Saenuri Party and told them that their studies have found that the so-called “ecological dike” is the best option, which could be completed in less time and cost the least amount of money. He added that lowering the water levels won’t completely prevent the damage anyway, while the dike will.

Still, many observers speculated that there was little Bak could do now that Byun became the head of the CHA because she has the full support of the Blue House. 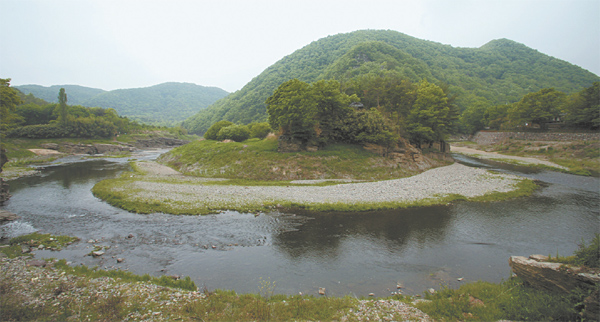 The area near the petroglyphs is filled with other treasures, including engravings of dinosaur footprints and Joseon-era shrines. [JoongAng Ilbo]

Although Byun was supposed to preside over Thursday’s visit, she backed out at the last minute, citing “an urgent schedule change.” Instead, Moon Myung-dae, an art historian and an honorary professor of Dongguk University who first discovered the rock art in 1971, attended in her place, and explained how he found the petroglyphs.

“It was Christmas Day of the year 1971,” the 72-year-old reminisced. “Local residents tipped me off. The surface was much shinier when I found it.” He went on to describe the petroglyphs as “the history, the thought and the art of our culture.”

However, the Ulsan mayor made a surprise visit to the media event, reiterating his previous claims that an ecological dike is the best available option and that Ulsan will not back down. He added that now that Ulsan has found through a scientific study that lowering water levels won’t preserve Bangudae, there is no way that Ulsan will allow that to happen.

Nonetheless, Kang Gyeong-hwan, the head of the Bangudae special task force, said that the CHA will add the Bangudae petroglyphs to Unesco’s list of world heritage sites by 2017, intensifying the impasse. Currently, they are on Unesco’s tentative list. 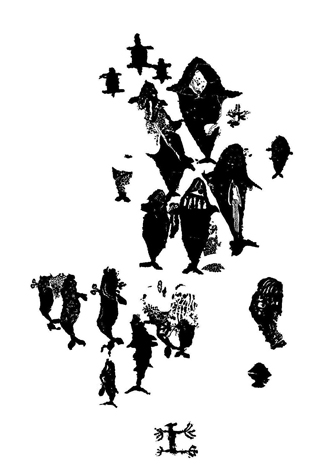 The petroglyphs show many different whales. Provided by the CHA

What was certainly amazing was the splendid, picturesque view along the Sayeon Lake and Daegok Stream, filled with mysteriously-shaped, gray rock cliffs, which one passes by on the way to the Bangudae petroglyphs. The 10-minute boat ride along the lake, however, is actually off-limits to the general public, as the lake is managed by Korea Water Resources Corporation and is a clean water supply for the residents. The closest view the general public can get of the ?petroglyphs is from an observatory area set up about 20 meters away from them.

In fact, the whole area surrounding the petroglyphs is not just scenic but also a treasure trove. In the nearby area, there is Cheonjeonri Carved Stone, a national treasure that also feature petroglyphs from other eras; fossilized footprints of dinosaurs, also a recognized cultural property by the state; and Joseon-era memorial halls. And that is why it’s not just the Bangudae petroglyphs that are on Unesco’s tentative list, but the whole surrounding area as well.

Against this backdrop, the annual “Ulsan Whale Festival” kicks off its four-day run on April 25. During the festival, there is a reenactment of prehistoric whale-hunting activities as well as various performances and parades.

Although it may appear that Ulsan doesn’t care about Bangudae as much as it cares about the supply of and fees for clean water, local residents say that is not so.

“Listening to CHA’s argument makes Ulsan people sound like they couldn’t care less about our cultural heritage,” the Ulsan mayor lamented. In fact, there is known to be a saying here that Ulsan won’t give up its Bangudae for anything.

And although there is much to read about the prehistoric life and people from the Bangudae petroglyphs, whales and whale hunting are the key. “Of the 307 drawings, 54 of them are whales,” said Lee Sang-mog, the director of the Ulsan Petroglyph Museum. “Whale hunting in those times was like traveling to the moon in today’s mind-set. The global academia thought whale hunting began around the 10th century, but this relic moves up that date by 5,000 to 7,000 years.”

Lee adds that it’s also interesting how many of the animals are drawn as pregnant, which show the prehistoric Koreans’ wish for fertility; how men’s genitals are portrayed in an exaggerated manner; and how “shamans” appear.

As the central and local governments continue their power struggle over different interests, the “water torture” on the precious relic continues, with its surface cracking and peeling off. According to the Cultural Heritage Administration, a scientific study has concluded that 24 percent of the surface has already been damaged.