A tale of two Koreas

A tale of two Koreas 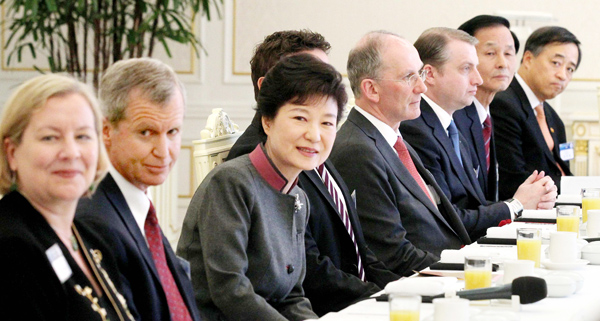 Korea is much in the news these days. Unfortunately, most of the coverage concerns events in the Democratic People’s Republic of Korea, or North Korea. South Korea features primarily as a potential target of, or combatant with, the North. Pyongyang’s recent saber-rattling is par for the course, aimed at distracting attention from a new South Korean leader; in this case, Park Geun-hye, the Republic of Korea’s first female president.

Judging by the number of columns in the international print media, and the many calls for interviews received from international media sources, Pyongyang has already succeeded in this objective, even if they are unable to press for other strategic gains. This piece, therefore, aims to go a small way toward restoring the balance, by noting the considerable achievements and contributions to international society made by governments in Seoul, and advising against undue focus on the North.

South Korea has grown from being an extremely poor country, heavily dependent on official development assistance, to become the world’s 13th-largest economy, and a member of the OECD Development Assistance Committee. In accordance with its new responsibilities, South Korea is looking to expand ?its official developmentment assistance, or ODA, budget. It further hosts many governance and development fact-finding missions, and sponsors the studies, through the Korean Overseas International Cooperation Agency, of large numbers of graduate students from developing economies. South Korea is unique among donors in not suffering from any neo-imperial baggage.

The last two decades have, in addition, seen dramatic progress in political governance, as a successful transition to democracy was followed by democratic consolidation. These milestones have been achieved in the context of one of the most insecure neighborhoods in the world. South Korea is also a dynamic new player in regional and global governance, and its new assertiveness has seen the country host the Group of 20 and the High Level Forum on Aid Effectiveness. South Korea can serve as an inspiration to other developing, conflict-affected countries.

The North, by contrast, is in serious trouble. Its governance failures threaten not only its citizens but also its neighbors. Yet these days, it is North Korea which has seized the attention of the world, even if for all the wrong reasons. Indeed, the leadership of North Korea appears to revel in and to require notoriety. Kim Jong-un’s recently deceased father, Kim Jong-il, purportedly noted that “as long as people are talking about me, I must be doing something right.” Pyongyang certainly seems to know how to push everybody’s buttons through dramatic headline-grabbing threats against Seoul, Washington, Tokyo, U.S. military bases, embassy staff and foreign residents of both Koreas.

But this bluster, and the international instability it produces, is at least as much for domestic consumption, as the Kim family tries to shore up support for a failing regime. North Korea could potentially struggle on for another decade or two without reform, but then will be faced with dramatic collapse. On the other hand, a soft landing based on reform and transformation will also see the old elites swept away. It is the weakness of North Korea, not its strength, which truly threatens international peace and security.

It is dangerous to ignore the North, but it also plays into their hands to overreact. Instead, it might better serve the cause of peace and security to dedicate some of those column inches to the good news emanating from Korea in terms of the South’s robust weathering of the global financial crisis, or even the assistance given by the Republic of Korea to the people of its fraternal enemy.

South Korea needs the world’s support once more, but this time it just needs the confidence of others in the good work it is doing, rather than scaremongering, selling Korean stocks or driving down the Korean won. Those of us who have made South Korea our home remain confident in its ability to weather the current storm, see the country as a good bet in all senses of the word, and, despite the advice from Pyongyang, we are not taking cover or seeking to leave.

* The author is honorary envoy for public diplomacy of Korea and department chair and professor of international relations at Ewha Womans University.