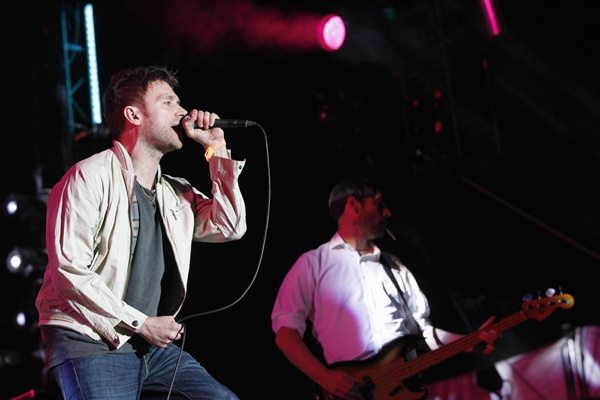 Blur, who led a new wave of rock-infused Britpop in the 1990s and recently reunited after a six-year hiatus, brought their trademark no-frills style to the Coachella main stage Friday evening.

Lead singer Damon Albarn, who last performed at Coachella with animated music group Gorillaz in 2010, quipped about the sunny desert climate weather, saying: “A lot of our songs have been informed by our bad weather .?.?. it’s very nice to enjoy your sunshine.”

The reunited band, formed by Albarn, Graham Coxon, Alex James and Dave Rowntree, performed some of their best known hits including “Girls & Boys”, “Beetlebum”, “Coffee & TV” and the rabble-rousing “Parklife” and “Song 2.” Albarn also slowed the tempo with tracks such as “Out of Time” and “Tender.”

Blur were followed by The Stone Roses - comprised of Ian Brown, John Squire, Mani and Reni - who kept the show going until past midnight at the festival, with hits including “I Wanna Be Adored” and a long rendition of “Fools Gold.”

Known for springing surprises on the unsuspecting audience, Coachella has often produced moments in past festivals that captured media attention, such as a hologram of late rapper Tupac appearing on stage and performing last year.

Eager to keep the tradition of surprises alive, a teaser music video by Daft Punk shown before the Yeah Yeah Yeahs’ set Friday had audiences excited for an appearance from the French duo, who were not on the Coachella lineup this year.