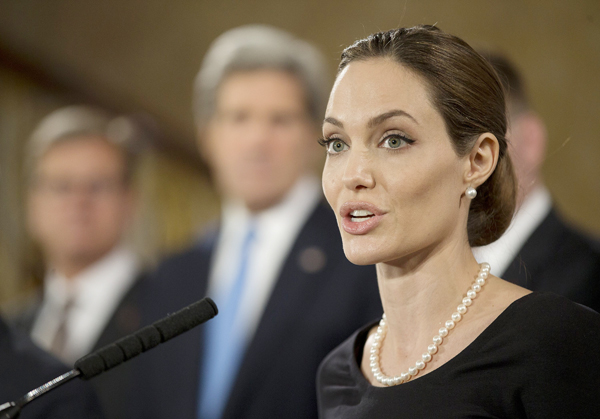 LONDON - Angelina Jolie said on Thursday that rape in war zones was preventable and urged foreign ministers of some the world’s most powerful nations to boost efforts to bring wartime sex offenders to justice.

Speaking in London after a meeting of Group of 8 foreign ministers including the newly minted U.S. Secretary of State John Kerry and Russian Foreign Minister Sergei Lavrov, the actress said the world needed to do more to prevent such crimes.

“Hundreds of thousands of women and children have been sexually assaulted, tortured or forced into sexual slavery in the wars of our generation,” Jolie said, flanked by eight ministers in suits and Zainab Hawa Bangura, United Nations Special Representative on Sexual Violence in Conflicts.

“Today I believe their voices have been heard and that we finally have some hope to offer them. I welcome the long overdue stand that the G-8 has taken,” Jolie, a goodwill ambassador for the United Nations High Commissioner for Refugees, said.

G-8 foreign ministers agreed to a call for boosting efforts to seek justice for the victims of abuse, including $35.5 million to fund prevention and response efforts.

British Foreign Secretary William Hague said the incidence of rape in conflicts from Rwanda to Bosnia-Herzegovina was one of the world’s most neglected injustices.

“We know that a huge number of the victims of sexual violence are children: often very young children and sometimes babies,” said Hague. “We know that this violence inflicts unimaginable suffering, destroys families and communities, and fuels conflict.”