Cheap Indian upstarts get the best of the big boys

Cheap Indian upstarts get the best of the big boys 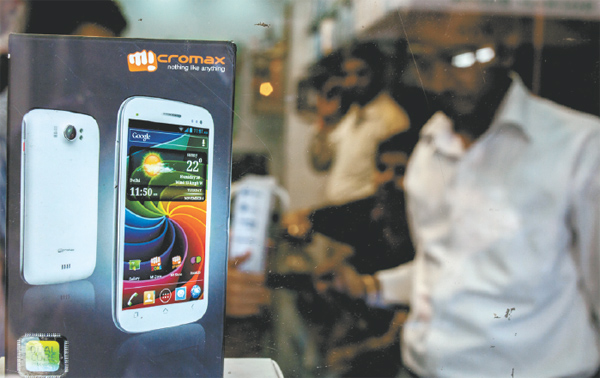 A Micromax Informatics smartphone is on display Tuesday at a wholesale outlet at Gaffar Market in New Delhi. [BLOOMBERG]

Apple and Samsung Electronics are being beaten in the fast-growing Indian smartphone market by a couple of aggressive local competitors.

Sales growth at Bangalore-based Karbonn Mobiles India and Micromax Informatics is being fueled by Indians buying their first smartphone to surf the Internet, which will be accessed by more than 300 million people by 2017. Their secret: the price.

In a country where about 800 million people live on less than $2 a day, Karbonn handsets start from 3,599 rupees ($66) and Micromax’s from 3,999 rupees, less than the cheapest Apple and Samsung smartphones. The iPhone 4 is available for 26,500 rupees and Samsung’s Galaxy Y Duos Lite for 6,110 rupees.

“India is poised for a smartphone boom; just look at the Internet penetration and potential,” Deepak Mehrotra, chief executive officer of Gurgaon-based Micromax, said in an interview. “But we don’t see any point to offering a Ferrari.”

India will become the third-largest smartphone market by 2017, according to the Framingham, Massachusetts-based researcher IDC, after China and the United States. Samsung, based in Suwon, remained No. 1 by unit shipments in the fourth quarter of 2012 and Cupertino, California-based Apple was sixth after shipping 254,000 iPhones, according to IDC.

Micromax, which ranked second by shipments, and fifth-placed Karbonn are growing faster, according to IDC. Micromax increased shipments to 633,000 smartphones in the last quarter of from 9,990 a year earlier, while Karbonn grew to 304,000 from zero, according to Gurgaon-based Consumer Media Research. Karbonn introduced smartphones in April 2012, said Shashin Devsare, executive director at the handset seller.

Karbonn subsidizes monthly data packages for some users carrying their phones, contrary to the global model of offering discounted devices to lure subscribers into signing annual service contracts, according to Devsare.

The two Indian mobile-phone sellers are both doing so well that they have considered going public.

“The scale of the Indian smartphone market is growing by leaps and bounds with increased affordability,” said Manasi Yadav, an analyst at IDC in India. “Local vendors have remained dominant in the sub-$100 price band while they pose serious competition in the $100 to $200 range.”

Micromax and Karbonn can’t import Chinese components and assemble their signature handsets fast enough, as demand for many of their Google Android-based phones is exceeding supply across the country. Online vendors are out of stock of the Micromax Canvas HD, leading consumers to New Delhi’s gray market shops, where the handset commands a 1,000-rupee premium, said Suraj Singh, owner of the Great Mobile Shop in the capital’s Gaffar Market.

Karbonn unveiled the Titanium S5 on March 15, with similar technical specifications to the Canvas HD: Qualcomm’s Snap Dragon quad-core processor, an 8-megapixel camera and a 5-inch touchscreen for 11,990 rupees. Samsung, the market leader in Indian smartphones, offers the same features on its Galaxy Grand for 21,500 rupees. The iPhone 5 starts at 45,500 rupees in a market where operators do not subsidize handsets.