Students leave after classes at a cram school in Daechi-dong, southern Seoul, which is known as a mecca for high-priced private institutions. [JoongAng Ilbo]

Kim Young-hee, 45, runs a laundry shop with her husband in Yeoksam-dong, an affluent neighborhood in southern Seoul. She earns less than 3 million won ($2,650) a month. Such an income may be sufficient for a couple, but Kim has two daughters - one at university and the other in high school.

“Korean parents are doomed to die in debt,” she says. “It seems endless to think about raising kids until they get married.”

Average Korean parents support their children financially until they marry.

College tuition fees for one child for four years averaged 40 million won. For marriage, a price tag of 100 million won won’t surprise many.

For people who earn about 2.5 million won a month, relying on loans is inevitable.

Kim already took out 50 million won in loans from a savings bank to send her older daughter to university. Repaying the loan with interest takes more than half her monthly income, and she will have to pay until her second daughter finishes college. 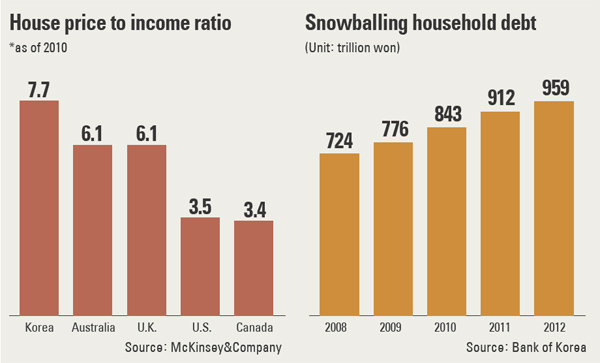 “A glimmer of hope is that our well-educated daughters will start earning money in a few years,” she says.

The report identifies the root causes of financial stress on middle-income Korean households, including underdeveloped services and the number of small- and medium-size enterprises, like Kim’s laundry business.

It is the first such report by McKinsey since 1997 at the time of Asian financial crisis. McKinsey says it is the time for Korea to “reboot and make some fundamental changes to go to the next level, like a high performing Formula One racer making a much-needed pit stop to stay ahead of the rest and come out on top.”

“Middle class-Koreans are subjected to a ‘double whammy’ - mounting housing debt and educational costs, which are hijacking the growth potential of the country,” says Richard Dobbs, director of McKinsey Global Institute. 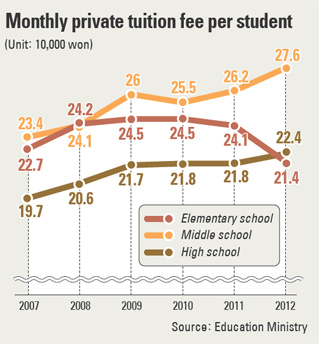 According to the report, most Koreans shoulder high monthly payments for housing loans and spend more on private education than almost any society on earth.

Spending on housing debt and education has risen sharply in the past 15 years, the report showed. In the meantime, income growth has been slowing, largely due to the creation of more low-paying jobs at SMEs than higher-paying positions at large companies.

As a result, the financial situation of middle-income households, those earning from 50 to 150 percent of the median income of $37,000, has deteriorated substantially over the past two decades, it said.

Home prices in the country are an average of 7.7 times more than the median income, far higher than in other advanced economies, and the wealth of Korean families is nearly three times as concentrated in real estate as the wealth of U.S. families. About 53 percent of household debt is housing-related, or more than twice the U.S. level.

The country’s household savings rate has plunged from about 19 percent in 1988 to 4 percent in 2012, among the lowest in the OECD group, the data showed. The proportion of middle-income households in the red, with monthly expenses exceeding income, has jumped from 15 percent to 25 percent.

The report pointed out that most Korean mortgages are of short duration, typically 10 years, and require high monthly payments, leading to a deficit for nearly 55 percent of middle-income households. About 90 percent of loans have adjustable interest rates, exposing borrowers to surges in payments.

The government’s tight loan-to-value (LTV) limits, introduced during the Roh Moo-hyun administration to contain a housing bubble, have caused a rise in high-cost housing debt, the report said.

The LTV rate is a gauge used by banks to determine the amount of home loans based on the value of the property. The rate varies by city, but the average is 50 percent for Seoul and its metropolitan area, and 60 percent in rural areas. The spread on a loan to cover 80 to 90 percent of a purchase price is 4 percentage points over a 50 percent LTV loan, or twice the premium charged in the United States.

“If LTV limits were raised and high-interest loans were rolled into bank mortgages, Koreans could reduce loan payments by an estimated $8 billion annually,” the report forecast.

Early this month, the Park Geun-hye government decided to raise the limit to 70 percent for first-time homebuyers as part of a comprehensive policy package to boost the moribund real estate market, which has been a major drag on economic growth.

Korean families also place an extremely high value on higher education and have engaged in an “education arms race,” the report said. These families are willing to pay fees for private after-school classes and hire tutors to give their children a chance to enter an elite university.

McKinsey’s data shows households spend 9 percent of their income on education and nationwide education spending is about 8 percent of GDP.

Korea has the highest rate of college attendance among OECD nations, with 71 percent of high school graduates admitted to four-year colleges, the report showed.

“As long as Koreans overextend themselves to finance homes and education, growth in the consumer economy will be limited,” the report said. “Housing and tuition payments will continue to crowd out other types of spending, and Korea will struggle to create a more balanced economy that relies on both consumer spending and exports.”

“An alternate educational track that can lead to good careers and solid middle-income compensation is crucial to save families from the financial abyss due to education expenses,” said Suh Dong-rok, a co-author of the report. “It’s absolutely crucial that the nation’s top companies, professional firms and SME associations get together and develop the right curricula that can lead directly to employment.”

The report suggests Korea establish a strong vocational program as one way to hold the line on education spending.

The Park government has pledged to provide more support for these schools in a bid to create a new environment where young job seekers aren’t dependent on academic backgrounds. Seven new Meister schools are scheduled to open this year.

A dual-track system proposed by McKinsey would provide an alternative to the traditional post-secondary educational path. This track would prepare students specifically for business careers.

“The success of the new vocational track will depend very much on successful partnerships between the educational system, provide reliable aptitude testing and employment counseling - and the private sector - help defining skills and course requirements to establish a smooth path to employment after graduation,” the report said.