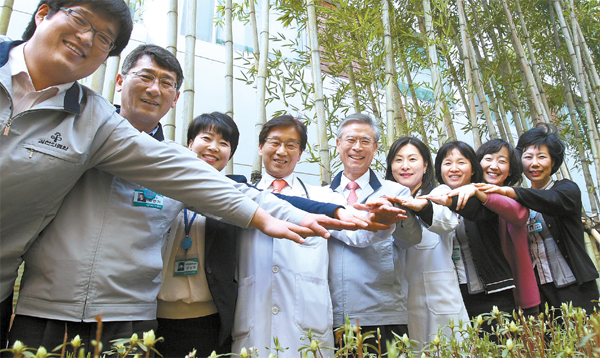 Kim Young-il (center), president of Gimcheon Medical Center, has led the provincial-government-run hospital successfully, standing out among other facilities that have been hemorrhaging funds. By Gong Jeong-sik

Following a report that the vast majority of government-run medical centers operate in the red, the perceived lax and inefficient management of such state-funded hospitals has come under scrutiny.

Amid the spate of money-losing institutes, a few well-managed public medical centers stand out.

Having been turned into a provincial-government-run body in 1983, the medical center incurred 22.4 billion won ($19.7 million) in losses over 24 years and failed to provide payment of 1.7 billion won to its employees.

Demoralized employees became hostile to the sick that visited the hospital, leading to a further decline in the number of patients.

But things began to change in 2009, when Kim Young-il, a dentist and formal vice governor of state affairs, became the president of the medical facility.

The 59-year-old head brought a cot into his office to stay at the hospital day and night. At night, he cheered up people on night duty, and in the morning he baked bread for employees coming to the center.

He constantly discussed with the staff at all levels about ways to better manage the hospital and concluded that they should first change the old medical equipment and beds.

“It’s important to discuss how to better manage a hospital between the president and staff,” said Kim.

“We first set a goal that we seek to achieve and then focus on implementing things that we agree upon. The process accelerates the turnaround,” he said.

The employees were skeptical at first, believing his intention was to run for governorship next year.

But Kim’s sincere endeavor finally won over the staff and they united to find a way to improve the hospital.

The workers voluntarily turned in 5-15 percent of their wages. The president expressed his gratitude by returning 50 percent of his salary.

With a more sanitized facility and kinder staff, the medical center began attracting patients in droves.

“Doctors and nurses are really kind. Their care really eases the pain,” said Yoo Gye-sun, 75, who was hospitalized at the Gimcheon hospital.

“It’s really different from when I came here years ago,” she said.

It increased the number of beds and hired 100 more workers, having become the only profit-generating public hospital.

The Gimcheon Medical Center is not alone in successfully transforming itself.

The provincial government entrusted the management of the Masan hospital to Gyeongsang National University Hospital, which led the restructure of the cash-strapped institute.

The university hospital sought a way out in treatments targeting the elderly, such as knee joint surgery and rehabilitation therapy.

“As we share human and other resources, people might expect the Masan Medical Center to offer university hospital-level services. That’s partly why more and more people come to the Masan center,” said Jang Se-ho, the president of Gyeongsang National University Hospital.