Gov’t may limit sale of junk food in school zones

Gov’t may limit sale of junk food in school zones 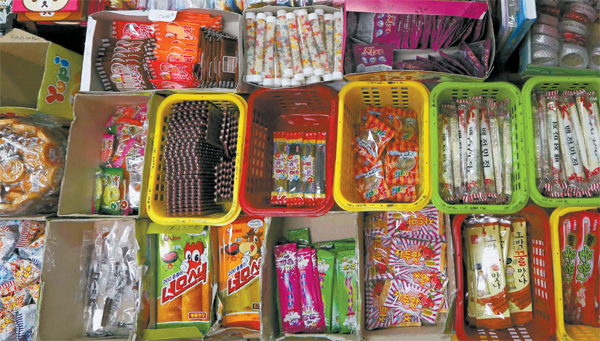 A wide range of junk food sold near a school zone lacks expiration dates and ingredient information, posing a threat to children’s health. By Oh Jong-taek

A bevy of colorful candies, snacks and chocolates are neatly arranged on the shelves of mom-and-pop-stores near the elementary school. What may look innocuous, however, is high in fat, sugar and calories.

Free from food regulations issued by the government, some of the small stores are not equipped with basic food storage systems such as refrigeration, according to a survey jointly conducted by the JoongAng Ilbo and consumer group Green Consumer Network.

The survey found that only 19 out of 44, or 43.2 percent, of those independent stores located near elementary schools have a refrigerator, which is necessary to keep food like chocolate from going stale.

Food sold inside the school is subject to rules that would require certain nutritional standards.

But most elementary schools don’t have a snack bar inside and the students end up heading to the nearby stores.

“Some food has information about ingredients, but it is too small and difficult for kids to understand what it really means,” said Kim So-ra, a member of the consumer organization.

In addition to the paucity of detailed nutrition information, the food is also high in saturated fat and calories. For instance, a chocolate bar weighing only 19 grams contains 100 calories.

“A bowl of rice has 300 calories, but if kids eat two or three chocolates after lunch, they will have far more calories than they need,” said Kim Hyun-sook, food and nutrition professor at Sookmyung Women’s University.

“They are more likely to be unhealthy and obese,” she noted.

What’s worse, the vast majority of junk food is imported from China, a country known to have less strict food inspection standards.

“Seventy percent of that food is processed in China,” said Han Sae-young, head of the food distribution company Kyungnam Sangsa.

He cited cheaper prices as the reason for the large demand from sellers.

“The merchants will find it hard to make ends meet if they sell food made in Korea. The prime cost of the imported items is usually 65 won, but they are sold for 100 won,” the head said.

Having acknowledged the growing concern for the unrestrained spread of junk food, the Park Geun-hye administration is considering implementing a regulation on the stationery stores in school zones.

“We plan to designate a limited number of eligible stores with proper storage equipment to sell food products,” said Park Hye-kyung, an official of the Ministry of Food and Drug Safety.

“The designated stores are not allowed to sell junk food that is high in calories and low in nutrition,” she said.

The prospective policy stems from the president’s presidential pledge to rein in high consumption of junk food by children. But the owners of the independent stores say that the restriction is too harsh and will likely damage their business.

“People don’t come to the small stationery store to buy office supplies like pencils and erasers. They prefer large supermarket chains, which sell those items at cheaper prices in bulk,” said Bang Gi-hong, head of an association that represents the stationery shop owners.

“So, the profits mostly come from food sales, accounting for 70-80 percent of entire sales,” the head said.

“The restriction is not a proper measure because most of us run the business to make a living.”

Experts suggest that the government at least issues a guideline outlining the minimum facility requirement to be able to sell food to younger children.

“The practice of selling food on the street should be changed,” said Ha Sang-do, a food engineering professor at Chung-Ang University.

“Some kind of standard needs to be set for the food sold near schools,” the professor said.