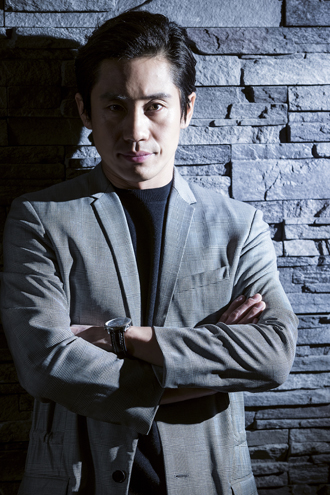 Actor Shin Ha-kyun said, “I enjoyed [filming] running scenes, but a lot of the wire works were really challenging.” By Park Jong-keun

Just like the movie title “Running Man,” the protagonist runs and runs, sometimes rolls and even dives from buildings for almost the whole? movie. But don’t assume the actor would be a muscular, tough guy. The actor is Shin Ha-kyun, who is well known for his delicate, emotional portrayals.

The 39-year-old has leapt into an action movie for the first time in his 15-year filmography. The veteran actor, who debuted in 1998, rose to stardom through the smash hit movie “Joint Security Area” in 2000, which is based on the 1950-53 Korean War. Since then, he ?broadened his ?range by playing a variety of roles, including a ruthless killer in the hit movie “Guns & Talks” in 2001 and a sharp-tempered neurosurgeon in the drama “Brain” in 2011.

Recently, he ?showed his striking screen presence in the exhilarating chase thriller “Running Man,” which hit theaters on April 4. The movie revolves around an innocent man who is falsely charged of murder. Well ahead of its release, the film heightened movie lovers’ anticipation by being the first domestic movie to be fully funded by a major Hollywood studio, Fox International Productions. As of April 14, its box office has attracted 1 million viewers.

The JoongAng Ilbo sat down with Shin recently to discuss his newest movie.


Q. Since it is your first action movie, I didn’t expect you to do so great.

A. I took the role since I felt compelled to work on an action movie before I got any older. I did most of my own stunts. To do that, I went through intensive physical training two hours a day for ?50 days in preparation for the film. I didn’t even drink during the production since I had to run and run every day.

That must have been hard for you.

It was really scary to jump from a four- or five-story building to another. I even have aeroacrophobia. But I could pull it off, I think, because I was fully into the role at the moment.

I found some scenes a little bit absurd. It felt like the action effects were emphasized to cover them up.

More than anything else, the top priority was giving an adrenaline rush to viewers. The movie crew and I faced numerous setbacks. As most scenes were shot in crowded public places, we always had to ask people for their agreement. In addition, when we worked in Jongno District, central Seoul, we had to stop filming several times because of rain. On Dongjak Bridge, we had to bear a lot of foul words by passing drivers. [laughs]

Besides action scenes, the movie tells the story of a strained father-son relationship and their reconnection, which played a part in drawing Fox International Productions to the film.

What was it like to play the role of a father as a bachelor?

I felt some pressure. You know, I’m not even married. Besides, the son of my character was a high school boy. I didn’t know how to relate myself to the character. Then I reflected on my relationship with my father. It really helped me through the production.

How was your relationship with your father?

I was born and raised in an ordinary family. I think most Korean fathers sacrifice themselves to support their family, but most of them are not good at expressing affection for their sons. There always seems to be an impassable barrier between Korean fathers and sons. I wanted to portray that Korean sentiment.

I think your acting is especially great in nonmainstream movies like “Save The Green Planet!” and “Sympathy For Mr. Vengeance.”

I did not intend on starring in only those kind of movies. It is more like I’m always seeking new things. I work toward perfection when working. But when I don’t work, I let go of my control. I don’t even make plans ahead of time. But I can say for sure that I will always be careful choosing my projects that can give inspiration to me and viewers, too.