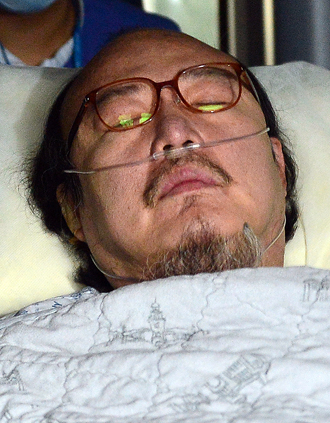 Kim Seung-youn, 61, chairman of Hanwha Group, who was indicted by prosecutors for embezzling billions of won of corporate funds, received a prison sentence again during his appeals trial.

Kim, who owns Korea’s 10th-largest conglomerate, was convicted of using about 320 billion won of Hanwha’s money to pay back debts of companies that he ran under borrowed names from 2004 to 2006 and incurring losses to the group by selling stakes to his family at cheaper prices in August.

Kim was sent to prison immediately after the verdict was read.

In mid-December of last year, Kim suddenly collapsed in his cell. Since then, he has been hospitalized at the Seoul National University Boramae Hospital.

Kim rode in an ambulance to the trial and was brought in on a gurney, breathing on a respirator, covered with a blanket and attended to by four medical staff.

“We considered that Kim has deposited 118.6 billion won to make up the damage that he caused affiliates of Hanwha Group,” the court said in the ruling. “But as an actual de facto member of the group, he is responsible for his misconduct.”

The prosecution demanded nine years of imprisonment and a fine of 150 billion won for embezzlement and breach of trust during his appeals trial.

The Seoul High Court paroled Kim in January as the 61-year-old tycoon claimed he had a “critical health condition.”

The court also annulled the lower court’s ruling that found Kim not guilty for the breach of trust charge. The lower court at the time said Kim didn’t generate any losses to the group, thus it isn’t a dereliction of duty.

“As a CEO of a large conglomerate like Hanwha, it is inappropriate to put the company’s affiliates in danger,” the court said in the ruling. “The process [that supported the companies he ran under borrowed names] was unlawful and irrational management discretion because they didn’t receive rational evaluations by the affiliates of Hanwha.”

Hanwha could not conceal their disappointment over the ruling.

“We respect the court’s decision,” Hanwha said in an official statement. “But we regret that the court accepted the prosecution’s breach of trust charge.”