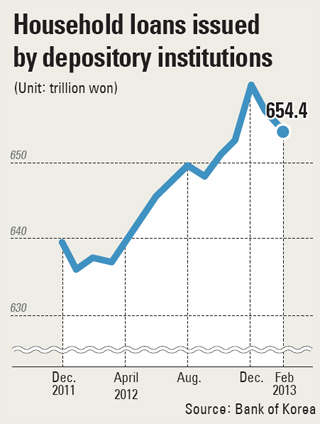 The growth trend in household loans has slowed lately, perhaps signaling that the process of deleveraging, or debt reduction, has started in Korea.

It is the first time the balance fell for two consecutive months since the central bank started compiling the data in October 2003.

According to the Nonghyup Economic Research Institute, from 2005 to 2011, household loans grew at between 7 percent to 11 percent level per year. Last year, however, the growth rate of household loans was 1.1 percent.

“The decline in household loans early this year has been affected largely by mortgage loans that have been transferred to the [state-run] Korea Housing Finance Corporation,” said an official from the Bank of Korea. “The growth trend in household loans has been clearly slowing down since last year.”

Experts also note that the sluggish real estate market has reduced demand for mortgage loans. In the past, loans from a depository institution were considered profitable when apartment prices were high because borrowers would be guaranteed higher profit than paying interest to the institution. Today, however, mortgage loans are considered a losing proposition because apartment prices have been falling, and the interest burden is too high.

Experts also note that government measures to reduce household debt have also helped trigger a slowdown in the growth of household loans. Baby boomers, those born between 1955 and 1963, are also contributors as they try to pay off debt before retirement.

Experts note that the overall deleveraging process in Korea in the mid- and long-term will reduce risks for the financial industry and allow households to better prepare for the future.

However, concerns would likely emerge if real estate prices fall.

“If the deleveraging process accompanies a decline in housing prices, concerns will grow over the financial soundness of related industries,” said Song Doo-han, an official from the reasearch institute.