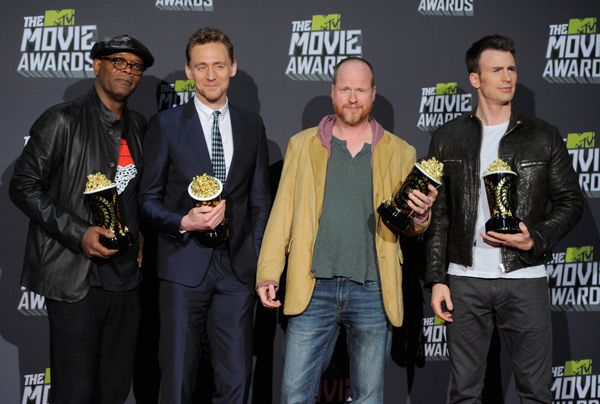 LOS ANGELES - With a cast of superheroes and villains, “The Avengers” beat out its competitors to become the big winner at the MTV Movie Awards.

The action romp won three awards Sunday, including the top prize, movie of the year.

“What’s the opposite of humbled? We’re Biebered to be standing here,” said “Avengers” writer-director Joss Whedon as he accepted the final golden popcorn trophy. “This is the award that means the most to me. I am so grateful and very excited for 2015; we’re going to bring you ‘Avengers 2.’”

“The Avengers” also won best fight and best villain for actor Tom Hiddleston who played Loki in the film.

Bradley Cooper and show host Rebel Wilson were each double winners at the ceremony at Sony Pictures Studios in Culver City, California. Cooper won the first prize of the night for his performance in “Silver Linings Playbook” and returned to the stage to accept best kiss honors for his smooch with co-star Jennifer Lawrence in that film.

Lawrence, who won the Oscar for her role in “Playbook,” was also a double winner, though she wasn’t on hand Sunday. In addition to the kiss award, she won the golden popcorn for her performance, but the prize wasn’t presented on camera.

Wilson, who opened and closed the show wearing Iron Man-style armor, won breakthrough performance for her work in “Pitch Perfect” and shared in the film’s award for best musical moment. Its stars, including Brittany Snow and Skylar Astin, opened the show with a mash-up medley.

Other musical acts were Macklemore & Ryan Lewis and Selena Gomez, who debuted her new song, “Come and Get It,” with a Bollywood-inspired performance.

The MTV Movie Awards are as much about the anticipated movies of the upcoming summer season as they are about the finest films of last year.