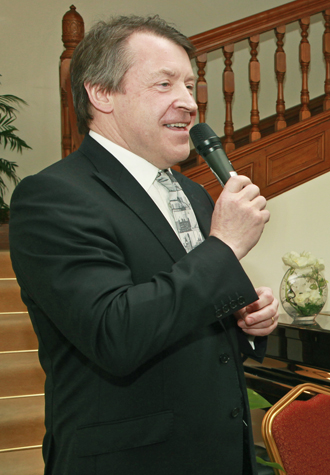 The Lord Mayor of London called the free trade agreement between Korean and the European Union the “most comprehensive ever negotiated” and said that legal and financial services are a promising area of growth between the United Kingdom and Seoul.

There is still work to do “to implement in full some of the financial services aspects of the FTA, including the off-shoring of data,” the Lord Mayor of London, Alderman Roger Gifford, said at a finance forum in Seoul earlier this month.

Through the trade pact that came into effect in July 2011, Gifford said, “Many tariffs were eliminated on signing - and 97 percent of all tariffs between the U.K. and Korea will be eliminated by the end of June 2014.”

The U.K. exports of goods to Korea increased by 82 percent in 2011, he said, a 15 percent increase if taking out the gains made by oil exports. Korea’s exports to the U.K. increased 24 percent in 2012.

“Such is the growing strength of that trade relationship that U.K. exports to Korea made the largest contribution -15 percent - to growth in U.K.’s total exports to the world in 2012,” Gifford said.

“The FTA is working for both of us: creating jobs in the U.K. and here in Korea.”

Elected to a one-year term, the Lord Mayor of London serves as ambassador for U.K.-based financial and professional services and is chief of the City of London Corporation, which provides business and local government services. London is home to some 50,000 Koreans.

Gifford and a delegation from the U.K.’s legal and financial services industry met with government officials and leaders in legal affairs and finance, including Shin Jae-yoon, chairman of the Financial Services Commission, and Minister of Justice Hwang Kyo-ahn, in a three-day visit to Seoul from April 2 to 4.

Gifford told the Korea JoongAng Daily at a law reception hosted by the Korean Bar Association and the Law Society of England & Wales at the residence of the British ambassador in central Seoul during his visit,

“We think that there are many areas we can do more together, both in infrastructure financing and also in law and financial services.”

English law is the governing law in other areas in which South Korean corporations are expanding, he said, in sectors such as finance, insurance, maritime, international sales and construction, especially in Commonwealth countries.

“I think there can be another three or four coming,” he said.

Gifford stated that he looks forward to seeing Korean lawyers take the opportunity to practice in the U.K. “We eagerly await the arrival of the first Korean law firm in London.”

New Korean Bar Association President We Chul-whan, in his congratulatory remarks, reaffirmed the strong bond between Korea and the U.K., adding that Korea’s expanding legal market has many various opportunities with the U.K. including legal training programs and seminars.