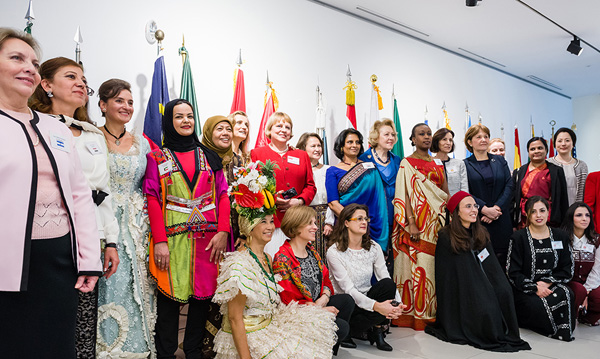 Spouses of ambassadors posted in Korea show off festive decorations and food eaten on different national holidays during the “Festive Decorations around the World” exhibition on April 3. Provided by Korea Foundation

The Korea Foundation earlier this month held an exhibit dedicated to introducing different holiday events and rituals around the world, organized and showcased by spouses of ambassadors posted in Korea.

Twenty-eight countries were represented in the “Festive Decorations around the World” exhibition, which ran April 3 through last Saturday and featured a broad range of festival adornments and food eaten on national holidays such as Easter and Thanksgiving Day.

“We want to get close to Koreans through the exhibition that tells about where we come from,” said Maria Ligaya Fujita, wife of Brazilian Ambassador to Korea Edmundo Fujita.

“Each spouse tried their best to better introduce part of their culture, holding meetings over and over,” said Fujita, who led the project.

Placed near the entrance, Indian spouse Neelam Prakash showcased festive ornaments for the country’s Hindu festival Diwali, which is also known as the “festival of lights.”

The five-day festival celebrates the birthday of Lakshmi, the goddess of wealth, with colored lights, candles and paper lanterns, as well as the use of religious symbols formed from colored chalk and rice.

“People make different decorations with various colored rice. While arranging the lanterns and candles, people gather and talk about their daily lives,” she said.

“During the Diwali, Indian people clean and buy new and special clothes for the celebrations. Most of them dress up in saris and other Indian clothing, to work the day before,” she added.

Jae Kim, wife of the U.S. ambassador to Korea, Sung Kim, explained Thanksgiving Day, one of the country’s most celebrated holidays.

“On Thanksgiving Day, we eat roasted turkey and sweet potatoes, spending time with family to strengthen the family bond,” she said.

She also told about the White House Thanksgiving tradition of sparing two lucky birds from being part of the national feast, an unusual but beloved tradition whose origins are unclear.

Perla Christaldo, the Paraguayan Deputy Chief of Mission, described a less familiar way of celebrating Christmas to Koreans: It’s celebrated in a deeply religious way. All the churches are decorated with lights and huge multicolor outdoor Christmas ornaments. The manger scene includes the traditional figures of the nativity scene, and is prepared according to our traditions. The manger scene is put on a “hill,” that is, boxes covered with painted manila paper and maybe with glued sand, too. Mary, the baby Jesus and Joseph are at the manger, together with an ox and donkey; outside are the Magi, shepherds and a lot of farmers and peasants. As background, a bush known as “ka’avove’i” serves as decoration. Some families like to put Christmas tree decorations on the bushes, too.

“The manger scene is usually surrounded by summer fruits, such as pineapples, watermelons, melons, grapes and others,” she added.