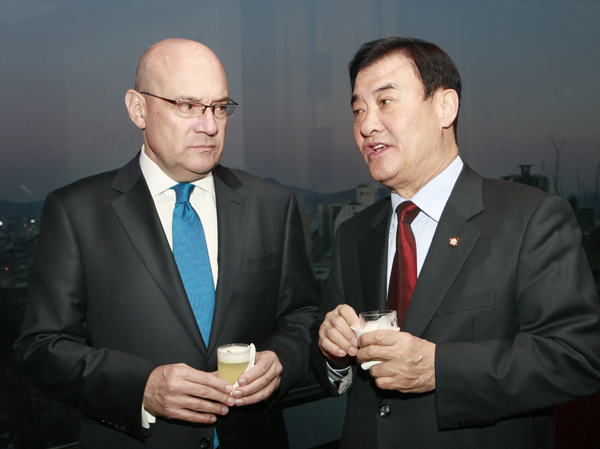 Peruvian ambassador to Seoul, Jaime Pomareda, left, and Kang Chang-hee, speaker of the National Assembly, celebrate 50 years of bilateral ties between the two countries at a reception with other guests of honor at the Hyatt Hotel, central Seoul, last Thursday. By Park Sang-moon

Peru and Korea celebrated 50 years of diplomatic relations at a reception attended by hundreds of government, business and diplomatic guests in central Seoul, last Thursday.

The relationship has shown “steady growth and dynamism,” according to the Peruvian ambassador.

“Peru is a star in South America, and Korea is a global actor, so the interaction between the two countries has been successful in part because of the conditions we both have,” Peruvian Ambassador to Seoul Jaime Pomareda told the Korea JoongAng Daily.

The two countries have signed a bilateral free trade agreement, which went into effect August 2011, the second country in South America to sign a free trade pact with Korea.

This was followed by an upgrading of bilateral relations to a comprehensive strategic partnership last May, after summits talks between President Lee Myung-bak and Peruvian President Ollanta Humala in Seoul.

More than 40 Korean companies invested nearly $3.5 million in Peru, which “makes it one of the largest recipients of Korean investment in the region,” said Pomareda. He called the economic relationship between the two countries complementary, adding that Korea is an importer of minerals and hydrocarbon, and Peru exports these resources.

But Pomareda said he would also like to see Peru export food as well as manufactured products, such as fine textiles and jewelry.

“Peru has a variety of attractions, from the food, to natural to archeological to adventure destinations,” said Pomareda.

When asked some key places visitors should head to in Peru, he listed the Amazon regions, trekking in the Andes, canoeing in its rivers and the Incan site Machu Picchu.

“K-pop is very popular in Peru. All the singers are very well known. Even if people don’t know the lyrics or don’t understand them, they are singing them,” he added.

“In recent years, new areas of cooperation have been added to the bilateral agenda, such as science and technology, environment, construction, agriculture, oceanography, energy, air connectivity, nuclear and defense and security, among others,” Pomareda said in his opening remarks. “They are all part of the future of the bilateral relations, in which I believe we will find fertile territory for the next 50 years.”

On Wednesday, the embassy and the Korea Chamber of Commerce and Industry hosted an investment forum attended by some 80 Korean firms as part of the five-day road show to promote Peru in Asian countries titled “Invest in Peru: It is possible.”

Two Peruvian chefs also offered guests a taste of their cuisines through delectable appetizers, such as bite-sized causa, comprised of seasoned mashed potatoes, mixed with chicken, crab or even octopus, and cakes made of the nutritious quinoa, grown in Peru.

Through the homemade lucuma ice cream, Korean guests enjoyed their first taste of the subtropical fruit, which is indigenous to the Andes. It is known as “eggfruit” as its flesh resembles a boiled egg yolk, and bits of the meaty flesh filled the ice cream with a je-ne-sais-quoi flavor and texture.

Maria Vasquez Chavez, a chef from Peru, said, “Ceviche is the top food back in Peru - everybody has it,” as another chef tossed together slivers of Peruvian raw fish, tiradito, similar to sashimi, sliced onions, diced mango, corn and garlic, then seasoned and splashed with lime.

“Many people don’t know about Peruvian food here in Asia, and we hope people can really know about our fresh produce and different cuisine,” she said.

“Though my visit was short,” said Kang at the reception, “I saw that the people of Peru are endowed with a profound cultural legacy and exceptional nature.”

Kang, who on April 2 was awarded in Peru the Grand Cross of the Order of the Sun, the highest award bestowed by the country for notable civil or military merit, said “While living on opposite sides of the Pacific Ocean, we are becoming closer day by day.”

“Since the free trade agreement between our two countries took effect in August 2011, we have actively supported each other’s growth and advancement,” he added, “and our peoples are trading a wide range of products and exchanging culture.”