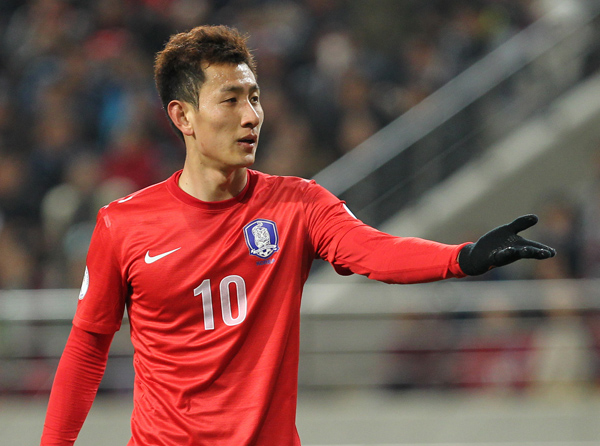 BERLIN - Two goals from Korean Ji Dong-won threw relegation-threatened Augsburg a lifeline with a 2-0 victory on Sunday over Eintracht Frankfurt, who lost ground in their fight for a Champions League spot.

The 21-year-old man of the match scored midway through the first half to break a personal goal drought of 981 minutes when his shot was deflected into the net as Augsburg, in the relegation playoff spot, looked the livelier side.

They failed to double their advantage before the break when Jan-Ingwer Callsen-Bracker hit his penalty over the bar, while a second goal-bound effort from Ji was ruled out because of a foul.

Soon after the break, Sascha Moelders fired a shot straight at Frankfurt keeper Oka Nikolov, following a slip by Carlos Zambrano, but Ji gave his side breathing space at 55 minutes after being put though by Jan Moravek.

Ji’s third goal of the season helped lift Augsburg to 27 points and within three of 15th-placed Fortuna Dusseldorf and safety.

Frankfurt remained in sixth place on 42, three behind fifth-placed Freiburg with five games left in the season.

VfB Stuttgart outplayed Borussia Moenchengladbach, 2-0, to lift themselves further away from the danger zone and dent their opponents’ hopes of playing in Europe next season.

A 28th-minute own goal, with Alvaro Dominguez heading in a Stuttgart corner, and a superb Christian Gentner tight-angle chip six minutes later gave the hosts only their second win in seven games that moved them into 12th spot on 36 points.

The defeat left Gladbach outside the top six spots that lead to automatic European qualification next season, in seventh place on 41.

The win was Stuttgart’s first in six games at home and moved it into 12th place. Stuttgart plays Freiburg in the semifinals of the German Cup on Wednesday.