Kerry says U.S. ready to ‘reach out’ to Pyongyang

Kerry says U.S. ready to ‘reach out’ to Pyongyang 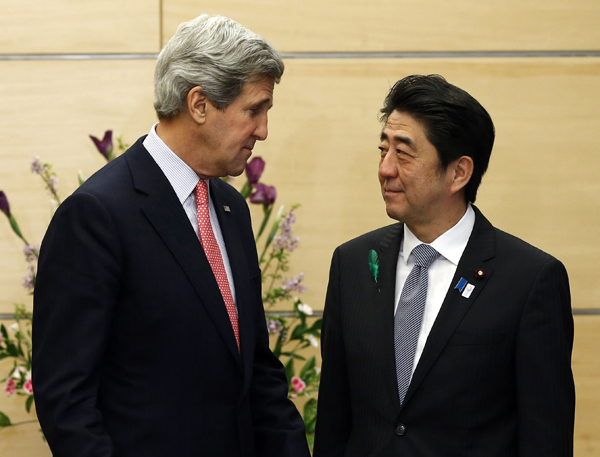 U.S. Secretary of State John Kerry, left, meets with Japan’s Prime Minister Shinzo Abe at Abe’s official residence in Tokyo yesterday. Kerry is in Tokyo as part of his Asia tour amid a tense situation over a possible missile launch by North Korea. [AP/NEWSIS]

U.S. Secretary of State John Kerry said Washington is ready to “reach out” to Pyongyang, during his trip to Tokyo.

“We are prepared to reach out, but we need [the] appropriate moment, appropriate circumstance,” Kerry told reporters in Tokyo on Sunday.

“There are standards clearly that we want to achieve to enter into negotiations, but there are certain channels that we can reach out to,” he said.

Kerry also suggested that the door remains open for dialogue with Pyongyang.

“If the Chinese came to us and said, ‘Look, here’s what we’ve got cooking and so forth,’ I’m not going to tell you that I’m shutting the door today to something that’s logical and that might have a chance of success,” he said.

He said Washington will do “what was necessary” to ensure security of its allies Japan and South Korea from a military attack by North Korea, but the U.S. government is still seeking a resolution in a peaceful way.

As part of his 10-day Asia trip, which included Seoul and Beijing, Kerry visited Tokyo on Sunday as his final destination, and met with his Japanese counterpart Fumio Kishida.

“We agreed that North Korea should cease provocative speech and behavior and show it is taking concrete action toward denuclearization,” he said on Sunday. “We cannot allow North Korea in any way to possess nuclear weapons.”

“The United States remains open to authentic and credible negotiations on denuclearization, but the burden is on Pyongyang,” Kerry said during his meeting with Abe. “[North] Korea must take meaningful steps to show it will honor commitments it has already made.”

Abe responded he “can’t tolerate that North Korea is ratcheting up tensions and repeating extremely provocative words and acts” and said Tokyo and Washington should “continue firm responses” against Pyongyang.

North Korea on Sunday turned down the South Korean government’s proposals for dialogue, calling it a “despicable trick.”

“We once again express our regret to their act of pouring cold water on the government’s efforts for resolution,” Kim Hyung-suk, spokesman for the ministry, said yesterday at a daily briefing.

Still, Kim said the South Korean government “maintains its position on urging North Korea to come to a dialogue and say what they want to propose,” which was mentioned in the official statement of the Unification Minister Ryoo Kihl-jae on Thursday.