Mixed messages over stance on the North

Mixed messages over stance on the North 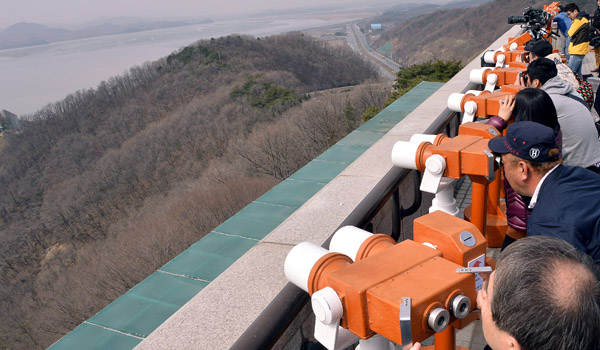 Tourists from South Korea look into North Korea through binoculars yesterday at the Odusan Observatory near Paju, Gyeonggi, near the inter-Korean border. [NEWSIS]

Signs of discord emerged between the Blue House and the Ministry of Unification over Seoul’s recent offer to Pyongyang to have a dialogue to defuse escalated tensions between the two Koreas.

North Korea rebuffed the Park Geun-hye administration’s proposal to resolve the situation through dialogue on Sunday, calling it a “despicable trick.”

The rejection was announced around 2:40 p.m. by an unnamed spokesman from the North’s Committee for Peaceful Reunification of the Fatherland through the communist regime’s Korean Central News Agency.

“The Kaesong Industrial Complex must be normalized through dialogue,” he said. “To discuss what North Korea wants, the North Korean authority should come to a negotiation table.”

Earlier this month, Pyongyang pulled out all North Korean workers from the joint factory park in the border city of Kaesong, bringing the South Korea-run factories to a standstill.

It was the first time the complex, the last remaining inter-Korean reconciliatory project, stopped its operations since its start in 2004.

About an hour after the North turned down the South’s call for talks on Sunday, the Ministry of Unification said it will still continue to be watchful of further responses from Pyongyang.

That position, however, was reversed later that night.

A meeting of top foreign and security officials was hosted at the Blue House by Kim Jang-soo, the chief of national security, on Sunday afternoon. Around 9:35 p.m., Ju Chul-ki, senior secretary for foreign affairs and national security, held a media briefing and announced the strong-worded position of the Park government.

“It is extremely regretful that the North has rejected our government’s proposal for a dialogue,” Ju said. “The South Korean businessmen participated in the Kaesong Industrial Complex because they trusted the inter-Korean agreements. Because the North pulled out laborers and barred the South’s entry to the industrial complex, the companies are in indescribable pain.”

Ju also said it is inhumane for the North to ban the food shipment for the South Korean workers that still remained in Kaesong.

“We strongly urge the North Korean authorities to take a responsible measure to resolve the workers’ sufferings,” Ju said.

After the briefing, the Blue House also sent a text message to reporters to stress that the late-night statement was “President Park’s position.”

It was not the first time that the Park government’s message toward the North flip-flopped.

When Minister Ryoo first announced a statement to press the North to defuse tensions through dialogue, he told the media that Seoul was not proposing talks.

Later in the afternoon, Kim Haing, presidential spokeswoman, also downplayed the significance of Ryoo’s statement, saying that it was not a formal proposal to Pyongyang, but reiteration of Park’s principle that the door to dialogue is always open.

Later that evening, Park, however, clarified that the government wants to talk to the North, stressing that the unification minister’s statement was issued to this end.

Despite the president’s clarification, Prime Minister Chung Hong-won spoke differently the next day about Seoul’s stance.

“If someone wants to use his fists, we must make him feel that his fists won’t work,” Chung said Friday. “Apologizing or trying to appeal to him or proposing talks will actually make the situation worse.”

Expressing concern about the North’s series of bellicose threats, Chung said the South must put its efforts into building up its deterrent power.

“We cannot just focus on trust-building and ignore deterrence when the North is escalating tensions,” he said.

Over the past weeks, the Blue House has stressed the importance of responding to the North’s threats in “one voice.”

The effort has apparently fallen short as the Park government officials continued to fumble to issue consistent messages, even after the president was forced to step in to clarify the situation. Seoul’s failure to issue a coordinated message also came at a sensitive time. Washington and Beijing have increasingly pressed Pyongyang to come to the negotiation table to resolve the situation diplomatically over the past few days.

North Korea observers also said it was inappropriate for the Blue House to directly respond to the North, leaving little room to maneuver.

Pyongyang used an unnamed spokesman of the Committee for Peaceful Reunification of the Fatherland, a North Korea propaganda organ affiliated with the Workers’ Party, to react to Seoul’s offer for talks. In contrast, the Park Blue House took the matter into its own hands, stressing that it was President Park’s position.

“National security chief Kim Jang-soo also attended the meeting for the first time,” said Kim. “But he made no mention about the North, nor did the senior secretary for foreign affairs and security.”