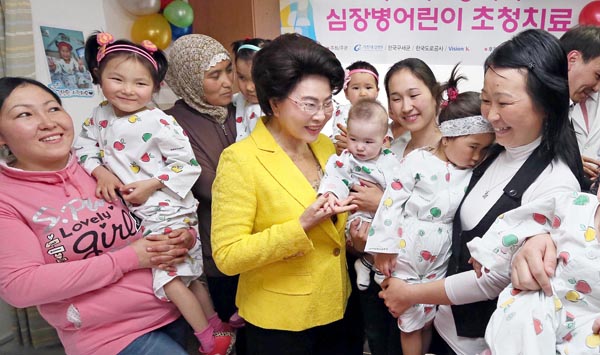 Lee Gil-ya, center, chairwoman of the Gachon Gil Foundation, poses for a picture Tuesday with young Kyrgyzstani patients, who received heart surgery from the charitable medical program at the Gil Medical Center in Incheon. By Kim Kyung-bin

A 28-year-old woman from the Central Asian nation Kyrgyzstan named Nazira, the mother of a 4-year-old daughter, reads a letter on Tuesday she wrote in a balloon-filled hospital room at the Gachon University Gil Hospital in Namdong District, Incheon.

“My daughter was diagnosed with heart disease and has two holes in her heart,” the mother tearfully reads.

“I was told she would survive only if she had heart surgery. So I moved to Turkey to work as a housemaid to make money for the surgery. But the money I was making was far from enough.”

Nazira spent a year working in Turkey, making about $1,000 in total, which was far short of the money required for heart surgery in her country, which costs $5,000. Then came help from the Gil Medical Center, offering her the desperately needed surgery to save her daughter, Nurayim.

“Coming to Korea and having my daughter undergo heart surgery has been such a miraculous experience for me. I will never forget the kindness and treatment I have received here.”

In the patient room were five other young children from Kyrgyzstan, who were also offered free heart surgery by the Incheon-based hospital.

Since 1996, Gil Medical Center has been providing free medical operations for children with heart disease from developing nations.

Over the 17-year-period, a total of 277 young patients from 14 countries, including Vietnam and Mongolia, have received heart surgery.

Nurayim, who has been recovering from surgery performed on March 29, was in the most critical condition among six young Kyrgyzstani patients as she had two holes, one in her ventricle and one in her atrium. All six patients from the Central Asian state are in good health. A 6-year-old patient named Gylym and Amina, 5, kept repeating “Hello” and “Thank you” in Korean during the Tuesday event.

“I remember feeling a sense of gratitude when I read a newspaper article about late U.S. President Ronald Reagan inviting young Korean children with heart disease to give them needed surgery in 1983,” said Chairwoman Lee, on why she began the charitable medical program.

“I feel a sense of pride when I see these young children who have recovered from their disease.”