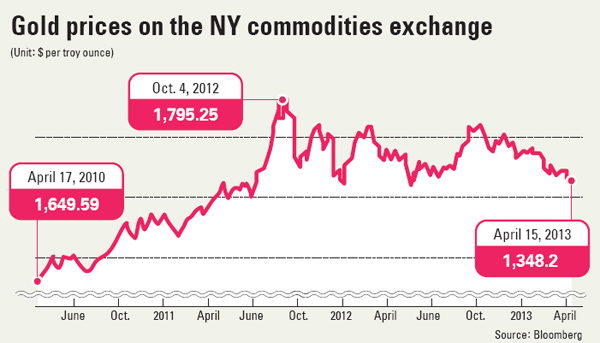 As gold prices recently have been falling sharply, the central bank’s investment judgment is once again being questioned.

The Bank of Korea (BOK) yesterday released a statement arguing that its additional gold purchase is a long-term investment as part of its goal to diversify its foreign reserve portfolio.

The central bank added that short-term loss generated from the fluctuation of gold prices means nothing.

Bullion for June delivery was $1,365.1 an ounce on the Comex in New York. Although this was a 0.3 percent increase, a turnaround from the previous trade, it was clearly a sharp decline from its level of more than $1,500 in February when the central bank made its most recent purchase. Gold for immediate delivery traded 1.4 percent higher at $1,366 an ounce yesterday in Singapore. On Monday, gold prices fell more than 9 percent, the sharpest one-day fall in three decades.

The drop was spurred by investors selling the metal to raise cash to cover other positions, according to Frank McGhee, the head dealer at Integrated Brokerage Services LLC in Chicago.

The economy in China, the largest gold producer, expanded less than economists expected in the first quarter, which prompted a 2.3 percent retreat in Standard & Poor’s GSCI Spot Index of 24 raw materials. The Chinese gross domestic product in the first three months grew 7.7 percent, which was below market expectations of 8 percent. Even when compared to the 7.9 percent expansion in the fourth quarter of 2012, Chinese economic growth was disappointing.

Additionally, the U.S. economic recovery has been steady, raising the possibility the Federal Reserve may scale back its stimulus.

“Gold is no longer a safe-haven asset,” said Brian Jacobsen, chief portfolio strategist at Wells Fargo Advantage Funds in Menomonee Falls, Wisconsin. “We could actually maybe see a long-term trend of gold trending toward $1,000 in order for it to better converge with other commodity prices.” 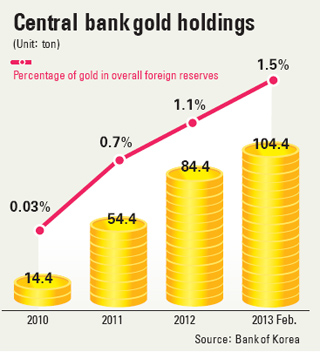 Alexandra Knight, a Melbourne-based economist at National Australia Bank, said people may start becoming nervous about whether gold will continue its run of always increasing on an annual basis.

“They may be getting to the stage where they realize it’s not an ever-increasing asset,” Knight said.

“We have considered the possibility of losses when investing in gold, but we have no regrets about increasing our gold reserves as we are focused on a long-term strategy.”

While gold accounts for 1.5 percent of the nation’s foreign reserves, which stood at $327.4 billion at the end of March, it is 3.2 percent of Japan’s reserves, 9.9 percent of India’s and 5.6 percent of Taiwan’s.

In the past, there were pressures on the central bank to increase its gold reserves to diversify the foreign reserve portfolio and hedge risks related to currency volatility.

However, the question was always the timing, as the central bank bought gold when its value was near its peak.

Since July 2011, the central bank added 90 tons to its gold reserves. Considering that gold is currently trading at about $1,300 an ounce whereas the central bank bought gold when it was between $1,500 and $1,700, the BOK’s loss is estimated to be in the vicinity of $600 million.

At the time, the BOK said conditions for increasing gold reserves were ripe as the nation’s foreign reserves exceeded $300 billion.

It added that increasing its gold reserves was important in not only diversifying its portfolio, but adding to the dollar value of the reserves, solidifying their role as a safety net while helping to boost the nation’s credibility in the global community.

Speculation was that gold prices would exceed $2,000 per ounce in five years.

The central bank further moved to increase its gold holdings as it added 15 tons within four months of the initial purchase. Last year,0 the central bank bought an additional 30 tons - 16 tons in July and 14 tons in November. In February, the central bank made this year’s first gold purchase when it bought 20 tons.

The central bank is likely to continue its gold purchases, as Gov. Kim Choong-soo in February said the purpose of securing gold is not profit but diversification.

“Everything isn’t looking that rosy, so gold should hold up,” said David Poh, regional head of portfolio-management solutions at Societe General Private Banking in Singapore.

“This tumbling over the past few days is overdue. We think a good time to accumulate is at the $1,300 level.”

Roger Bell, an analyst at JP Morgan in London, through a report, said the severity of gold’s 13 percent two-day tumble resembles an extreme capitulation.

“We do not believe gold’s positive investment case has fundamentally changed,” he said.