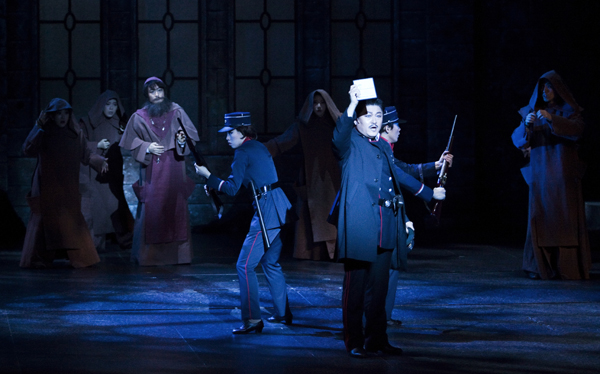 Although it sounds like a licensed musical from Broadway or the West End, “Arsene Lupin” is a Korea-produced musical based on Maurice Leblanc’s famous novel about an attractive thief. The musical is currently being staged at Blue Square in Itaewon, central Seoul. See THEATER, below. Provided by the organizer

April 21: One of today’s foremost jazz pianists Fred Hersch is holding his first solo concert in Seoul. The prolific pianist is the winner of Jazz Pianist of the Year by the Jazz Journalists Association as well as a five-time Grammy-nominated musician.

April 27: German electronic music pioneer Kraftwerk is holding its first concert in Seoul. The quartet is well known for its ingenious performances, and this time, it will dazzle on a stereoscopic stage specially designed for the show. To make the most out of the stunning visuals, all audience members will be given 3-D glasses at no charge. The combination of laser beams, a 3-D screen and techno music will usher fans into the fantastical.

May 6: Pianist Martha Argerich will join cellist Mischa Maisky for the first time on stage in Korea, although they have performed as a duet for more than 30 years.

May 17: American singer-songwriter Jason Mraz is holding a concert in Seoul. His special guests will perform for the first 100 minutes. The other musicians, invited by Mraz himself, will be guitarist Jung Sung-ha, local electronic band Idiotape, singer Roy Kim and British pop star Joe Brooks.

To Sunday: The novel by Alexandre Dumas has been recreated into an astonishing musical.

April 26 to June 9: This Broadway favorite depicts the last seven days of Jesus’ life. The rock opera musical was created by Andrew Lloyd Webber, who also composed smash hits “Cats” and “The Phantom of the Opera.” The cast includes rock star Yoon Do-hyun and Jo Kwon of 2PM as well as Michael Lee, who has performed the musical on Broadway.

To April 28: A Korean adaptation of Elton John and Tim Rice’s “Aida” is being staged for the third time in Korea.

To May 5: Attractive thief Arsene Lupin is the main character in Maurice Leblanc’s novel that has been adapted into a musical.

To May 26: “Mama, Don’t Cry” is a musical about a physicist who is a genius except when it comes to love.

To June 30: This creative musical is jam-packed with emotional songs written by Kim Kwang-seok, who died at the early age of 32. It revolves around the missing daughter of a Korean president and is set in 1992.

May 9 to 12: The Universal Ballet will again stage Korea’s first ballet 27 years since its debut.