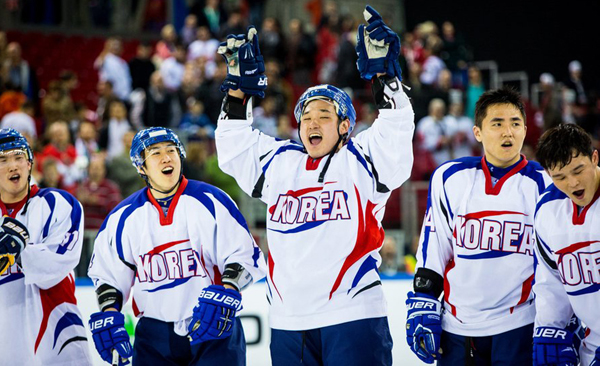 Korea stunned Hungary with a 5-4 win during an Ice Hockey World Championship Division 1 Group A game held in Budapest yesterday in Korean time. It’s the first time that Korea beat Hungary in men’s ice hockey. Hungary entered the game with nine wins and a tie against the Asian underdog since 1982.

“It is a touching victory that came as a result of everyone being one and giving it all,” said Yang Seung-joon, a senior official of the Korea Ice Hockey Association.

Korea is playing its first season in the Division 1 Group A, the second-highest division in the International Ice Hockey Federation-sanctioned world championships. The country’s goal is retaining its Division 1 Group A membership. The two best teams in the six-team division will be promoted to the top division next year, while the worst team will be relegated to Group B of Division 1. Korea was promoted from Group B to Group A last year.

Few people expected that Korea, ranked 28th in the world, would beat 19th-ranked Hungary, one of the strongest teams in the division. Korea was coming off a 4-0 shutout loss to Italy the previous day, while Hungary beat Great Britain, 4-2, on Monday.

The game appeared to be heading toward an expected result, as Hungary scored three goals in the first 14 minutes, keeping the crowd of 7,370 at the Sport Arena on their feet. Korea recorded only five shots on goal in the first period.

The mood changed when Kwon Tae-an put Korea on the scoreboard five minutes into the second period. Hungary struck back with a goal by Janos Vas within one minute, but Korea scored twice in the third period on goals by Kim Ki-sung and Kim Won-jung. Shin Sang-hoon scored an equalizer before the final buzzer of the third period. The game was still tied after a five-minute extended period, and the two teams entered a shootout, in which Korea scored two of its three attempts, while Hungary scored only one. The winner of the shootout receives one point.

Kim Ki-sung, who scored the shootout winner, said he managed to keep his composure amid the pressure.

“I realized that this was a historic moment,” Kim was quoted as saying by the IIHF Web site.

“But I just went out there and wanted to shoot the puck. At one moment I almost lost it, but then I scored. It was great.”

Brock Radunske, who scored the other shootout attempt for Korea, said that the Hungarian players got overconfident with their early lead, to which Hungary head coach Rich Chernomaz agreed.