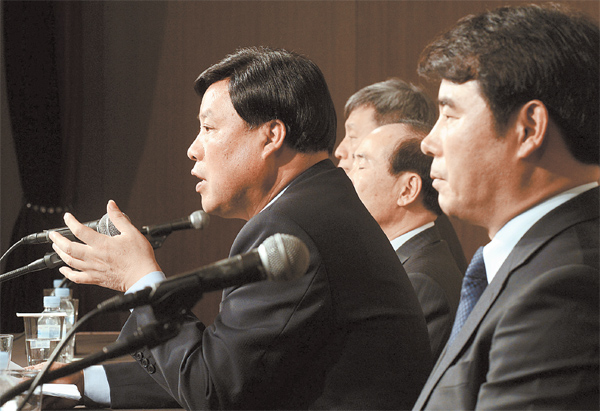 Celltrion President Seo Jung-jin announces yesterday his plan to sell the controlling stakes in Celltrion and its affiliates to a multinational drugmaker during a press conference held in Yeouido, western Seoul. [NEWSIS]

Celltrion President Seo Jung-jin said yesterday that he will sell his controlling stake in the Kosdaq’s No. 1 market cap company by seeking a buyer among multinational drugmakers. He cited predatory short-selling as the main reason behind the move.

“We have been using our company funds, which should be used for business investments, to buy company stocks due to indiscriminate attacks by short-sellers,” Seo explained.

A short-sale is when a third party sells stock with the intention of buying it back at a lower price, thereby making a profit on the stock’s loss.

Seo said he will begin the sale process in the first half of the year as the company is expected to get European Union approval for its antibody drug Remsima between May and June.

He didn’t specify any potential buyers.

“I will completely sell stocks of affiliates that didn’t go public, and I will not reverse my position on the company sale,” Seo said. “The company will grow, but it will be a loss for the country.”

According to market observers, Celltrion suffered from a surge in short-selling after rumors began to spread about window dressing of accounts and other issues since April 2011.

Some market watchers have questioned Seo’s intentions as his decision to sell because of massive short-selling has little to do the company’s value.

“The company may feel unfairly victimized by short-selling, but its sluggish stock price caused by supply and demand in the stock market isn’t the company’s fundamental problem,” said an analyst who asked not to be named. “Let’s wait and see how the latest developments play out.”

But Seo continues to blame “greedy investors” for the company’s woes.

“I have requested that the government tighten surveillance and keep track of short-sellers and their target stocks, but it has only focused on urging companies to become more creative without giving us any help,” he said.

The need for regulations is especially prominent, he argued, given that the Kosdaq has relatively fewer investors compared to the Kospi.

Seo previously created a buzz in a business world by becoming the youngest executive at the now-defunct Daewoo Motor.

He established Celltrion with two former colleagues in 2000, growing the company to 4.35 trillion won in market capitalization with 1,500 employees.

Seo is regarded as a legend among salary men for his ambitious moves.