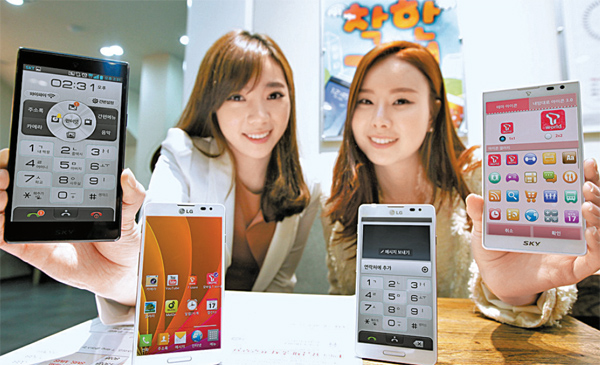 Government efforts to clamp down on mobile carriers’ practice of luring subscribers with excessive subsidies may be contributing to a burst of smartphone price bubble.

When a subscriber receives a 270,000 won discount - the ceiling for carrier-offered subsidies at the time of purchase - the actual cost to the buyer can be as low as 249,000 won.

SK Telecom said it would release at least four more “good phones” by the end of the year, claiming the marketing is aimed at “customer satisfaction with a reasonable price level and various additional benefits.”

“Sales of smartphones costing more than 900,000 won declined 30 percent last month from a month earlier, whereas sales of gadgets carrying price tags of between 500,000 won and 800,000 won went up 45 percent,” said Choo Woo-hyun, head of sales at SK Telecom.

The trend indicates consumers may be migrating to lower-priced gadgets in response to the decreased subsidies.

The move also seems to be affecting the price of the upcoming Galaxy S4, the next flagship smartphone from Samsung Electronics. Preorders for the S4 start Friday, with the smartphone’s release a week later.

Although its predecessor S3 cost 994,000 won at its launch last year, sources said Monday, the S4 is likely to be priced below 900,000 won - the lowest among Galaxy S series smartphones.

Two lower-cost Galaxy smartphones already are available: the Galaxy Pop at 715,000 won and Galaxy Grand, the cheaper version of the Galaxy Note 2 phablet, at 654,500 won. Whereas both run on quad-core processors, the Pop has a 4.65-inch display and the latter a 5-inch display.

Major differences with costlier versions lie in display resolution and the camera.

As subsidies frequently surpassed the legal limit of 270,000 won, the Korea Communications Commission, the top telecom policy maker and watchdog, slapped the carriers with fines of billions of won and temporarily banned them from signing up new customers.

After reaching its pinnacle in 2015 at 33.8 million units, the market is expected to slow by an annual rate of 1 percent starting in 2016, according to market researcher Strategy Analytics.