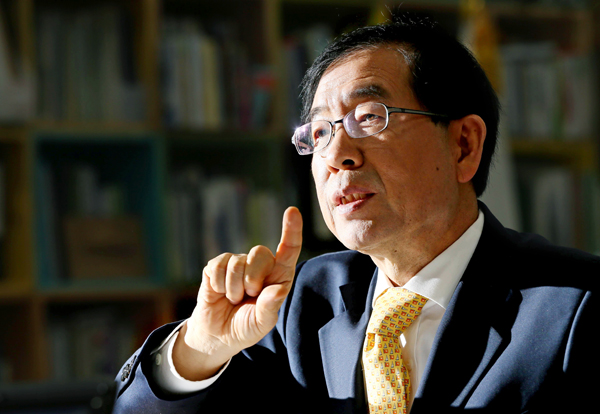 The Floating Islands, three men-made islands on the Han River in Banpo, southern Seoul, were created by former Mayor Oh Se-hoon at a cost of 139 billion won ($125 million) in 2009. The facility once opened to the public with a Fendi fashion show in May 2011 but has been neglected since due to mountains of problems including faulty construction work and contract problems between the Seoul Metropolitan Government and the project operator Flossom.

The JoongAng Ilbo met Seoul Mayor Park Won-soon on April 1 to hear about his plans and ideas for managing the giant city. He said that it is possible to create a hotel on the Floating Islands and that he will carry out a long-term project to make Seoul a more walkable city.

Q. It seems like you have many problems to solve, including the Floating Islands.

A. I think I inherited many more pending issues compared to previous Seoul mayors. There are many issues that I have to manage, but I thought that I also have to advance a new vision for the capital city. That is why I presented the “Plan for Seoul’s Next 100 years” recently. The modern days of the city will eventually begin.


Do you not think that Seoul is a modern city now? What are the problems?

First, the city has not spent time on introspection. The city never thought about the kind of happiness that those urban planning projects mostly focused on high-rise apartments could possibly bring to Seoul citizens. It then eventually carried out the outrageous New Town project. I think New Town is an issue that the municipal government needs more than 10 years to fix.

Second, we really haven’t thought about how we should manage the city from a broader viewpoint. For example, if you take the first bus or subway in the early morning, the cars are filled with street cleaners and building or apartment security guards, meaning that people in northern Seoul commute every day to the central or southern Seoul areas to work. In Hong Kong, most of low-income people live downtown. People working downtown must live in areas close to their workplaces because using public transportation generates expenses for them.

How are you going to handle the Floating Island?

There are many differences of opinion between the city government and the operator. We have many possible options if the negotiations end successfully. I have been considering making it a place for exhibitions, but it is also possible to build a hotel if necessary.

Some say that you are trying to reverse course from Mayor Oh Se-hoon’s administration.

No, I haven’t done such things because I think it is stupid to break out of the continuity of the city government’s administrative work. If you are talking about the Han River Renaissance Project, people already know that the Board of Audit and Inspection has concluded that the project is infeasible.

I really don’t like the name of the Hi Seoul Festival, which former Mayor Oh launched, but told my officials to keep the title when they suggested changing it.

You said that you will decrease car traffic to create a more walkable city.

That depends on how much citizens want. The city government recently began operating the vehicle-free promenade festival at Gwanghwamun in central Seoul.

Are you considering running for president in the future?

The post of Seoul mayor isn’t a step or a ladder to move to another position. It is an important seat. If Seoul changes, the entire country can as well.

A recent report on government officials’ assets and liabilities said that you have the highest debt with 594.7 million won ($533,291). Some said you are a man of integrity, but that isn’t a typical amount of debt.

I’m not a normal person. I used to be a great lawyer but jumped into civic movements when I was in my 30s. I never was able to pay off my house. The debts were incurred from my wife’s business.

Have you seen or spoken to Ahn Cheol-soo, a candidate for Nowon C District, northeastern Seoul, in the upcoming April 24 by-election?