Park to visit U.S. in May for summit with Obama

Park to visit U.S. in May for summit with Obama 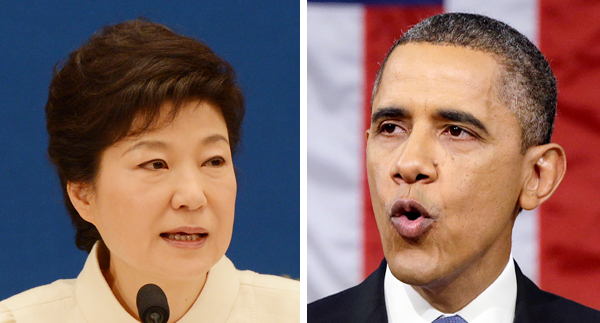 President Park Geun-hye will visit the United States in May to meet with U.S. President Barack Obama on a five-day trip focused on defusing tensions caused by North Korea’s repeated war threats and upgrading the 60-year-old alliance between Seoul and Washington.

The Blue House said yesterday that Park will leave for the United States on May 5. The first overseas trip for Korea’s first woman president comes at a sensitive time, as Seoul and Washington have strengthened their cooperation to ease tensions on the Korean Peninsula caused by Pyongyang’s constant war threats in recent weeks.

According to Blue House spokesman Yoon Chang-jung, Park will visit Washington from May 6 to 8 at the invitation of Obama. The presidential summit and a luncheon will take place on May 7, and the two leaders will discuss the new direction of the 60-year-old Korea-U.S. alliance and coordinate the two countries’ North Korea policy.

The White House also announced Park’s trip and said the two presidents will discuss economic and security issues to stress the two countries’ coordinated efforts, including “continued cooperation on denuclearization of the Korean Peninsula and countering the North Korean threat.

“They will also review the progress made in strengthening our economic ties and in enhancing and modernizing bilateral security cooperation,” the statement read.

“President Park’s visit underscores the importance of the [Korea-U.S.] alliance as a linchpin of peace and security on the Korean Peninsula and in the Asia-Pacific region,” the statement said.

During her stay in the American capital, a dinner commemorating the 60th anniversary of the bilateral military alliance, a meeting with Korean residents and a roundtable hosted by the U.S. Chamber of Commerce will take place, the Blue House said.

Ahead of her visit to Washington, she will visit New York City first. During her stay from May 5-6, she will meet with UN Secretary General Ban Ki-moon and attend a meeting with Koreans residing in the city.

On the return leg, Park will visit Los Angeles from May 8 to 9 and attend a luncheon hosted by the mayor of the city. She will also meet with Korean residents in the area over dinner.

The Blue House said Park’s visit is an important opportunity to upgrade the comprehensive strategic alliance between Korea and the United States to the next level. It also added the two leaders will assess the bilateral alliance and set forth a new direction for cooperation.

“The trip is also taking place at a very significant time because cooperation between Seoul and Washington is more critical than ever to resolve the latest tensions on the peninsula,” the Blue House spokesman said.

“The North is continuing its bellicose provocations by escalating nuclear and missile threats,” Yoon said. “The two leaders are expected to discuss plans to coordinate their policies while maintaining strong deterrence against the North based on the alliance.”

Yoon also noted the summit between Park and Obama, the first of its kind, will also serve as an important opportunity to build trust between the two leaders, who will work together for the next four years.

They are expected to share their views on Korean and Northeast Asian affairs, as well as other major international issues, the spokesman said.

At the meeting, the two presidents will discuss efforts to further the two countries’ partnership, including an assessment of the first year implementation of the Korea-U.S. free trade agreement.

While both presidential offices did not hesitate to promote the summit as an important diplomatic approach to deal with the North Korean security crisis, the Blue House and the White House made no mention of the forthcoming negotiation between Seoul and Washington to rewrite their civil nuclear cooperation agreement.

Talks to renew the 1974 pact, slated to expire in March next year, began this week in Washington, but it remains to be seen if the thorny issues involving South Korea’s demand for reprocessing nuclear fuel and enriching uranium for civilian use will be resolved this time.

Earlier this month, U.S. Secretary of State John Kerry said he is very hopeful that the two sides can reach a deal before Park’s U.S. visit.

There is considerable speculation that the bilateral nuclear deal will be discussed at the summit, since Park is a strong advocate of Korea’s wider powers for peaceful use of nuclear energy, but Yoon yesterday refused to say whether the issue is on the agenda or not.