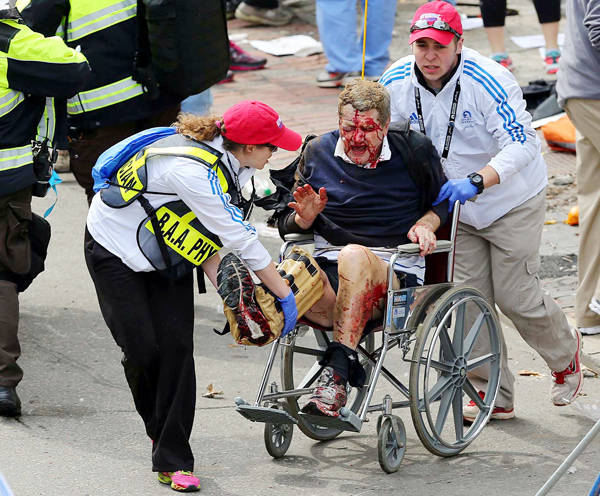 Medical workers aid an injured man at the 2013 Boston Marathon following an explosion Monday (Eastern Standard Time) in Boston. Two bombs exploded near the finish line, killing at least three and injuring some 140 others. [AP/NEWSIS]

The tragedy at Monday’s Boston Marathon impacted many Koreans here deeply, as the country has a long-running history with the annual race.

Two powerful bombs went off near the finish line, killing three, including an 8-year-old boy, and injuring more than 140 people.

The two explosions, about 100 yards apart, went off almost seconds from each other, around 2:50 p.m. (Eastern time) near the finish line on Boylston Street, in the heart of the city, knocking over spectators, shattering glass and filling the streets with plumes of smoke.

More than two-thirds of the 23,000 runners that participated in the 26.2-mile race had already crossed the finish line when the bombs went off.

The oldest annual running event in the world is the most familiar international marathon among Koreans, as Korean runners have set some historical records in the event.

Korean athlete Suh Yun-bok set a world record when he won the 1947 Boston Marathon, becoming the first Asian to do so since the race launched in 1897.

Only a half-century later, the event saw another Korean winner, Olympic silver medalist Lee Bong-ju, who came in first in the 2000 Boston Marathon.

Korea’s Ministry of Foreign Affairs yesterday confirmed that no casualties were reported among the 57 participants of Korean ethnicity in the race after the bombing.

Some 20 participants were from Southern California, including 11 from the Cerritos Easy Runners Club, the largest Korean-American running club in the U.S., numbering over 100 members, and seven from the Los Angeles-based Korean American Running Team, or KART.

Kim Soo-han, a KART member who participated in the race told the JoongAng Ilbo, “After some 3 hours and 59 minutes after the race started, I passed the finish line. And then soon afterwards, I heard a ‘bbeong, bbeong’ sound. It did not seem like the sound of a traffic accident, and then I thought something was strange, and a little later I learned from a text message that it was an explosion.

“Because transportation is blocked, I cannot go to the airport. I’m considering going to New York and flying to Los Angeles from there,” Kim said after the bombings.

Lee Ga-yeol, head of Easy Runners, said, “It took two hours just to check that all our members were safe with our cellphones. It is a relief that everyone is O.K.”

He added, “All the transportation was cut off so we walked to our lodgings. All our members were cold and hungry, but we were able to rely on each other because we were together.”

Authorities are currently tracking down who triggered the deadly bombings.