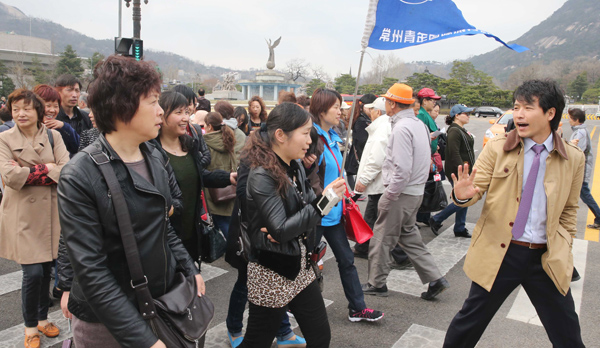 Chinese tourists visit a fountain plaza near the Blue House in central Seoul yesterday. Despite North Korea’s war threats, the number of Chinese visitors to South Korea has increased, while Japanese visitors have decreased over the same period. By Kim Sang-seon

On Monday afternoon, near Dongwha Duty Free Shop in Sejongno, central Seoul, about 20 Chinese tourists milled about. Judging by the smiles on their faces and all the bags they were carrying, they seemed happy with their purchases.

“Almost everyone in my country knows that North Korea is bluffing,” a 25-year-old Chinese tourist Lei said when the JoongAng Ilbo asked about Pyongyang’s recent military threats. “No one around me cares about them.”

That attitude about the North wasn’t much different than another Chinese tourist surnamed Lin, 30, who the JoongAng Ilbo met yesterday at Gyeongbok Palace, central Seoul.

Under cherry blossoms, she enjoyed taking pictures with her friends. “This [military threat] isn’t something new, is it?” she said. “If I was scared about it I wouldn’t have come to Seoul. I’m going to see Psy’s concert.”

She said she was visiting from Friday until today, the time period when the international media was speculating the North would launch a missile.

Unlike these Chinese tourists, the Japanese in Myeong-dong, central Seoul, were more afraid of Pyongyang’s military threats.

“I feel better now, but I really worried when I first arrived in the city a few days ago with my friend,” a 22-year-old tourist Hoshino Yuki said.

“I know that a war isn’t likely to break out, but I was scared that a military provocation like the Yeonpyeong Island attack might happen.” 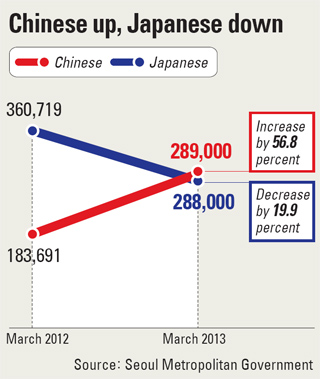 Such different ideas between Chinese and Japanese tourists over the North’s military threats have been reflected in the number of tourists visiting the city.

The Seoul Metropolitan Government said that a total of 288,000 Chinese visited Seoul in March, up by 56.8 percent compared to 183,691 in the same month last year.

“The weak Japanese yen was one of the biggest reasons in January, but the recent military threats in March made it even worse,” said Kim Ki-hyun, director of the Tour Business Division of the city government.

“Most of our customers are Japanese, but the number of customers has decreased by about 50 percent recently,” a 51-year-old massage shop owner surnamed Choi in Myeong-dong said. “We expected that more Japanese would come if spring comes, but the North kicked the stool out from underneath us.”

However, Cheogdam-dong, southern Seoul, where many luxury boutiques operate, is crowded with Chinese shoppers.

“The number of Chinese visiting our shop and the sales revenue are just about same as the last few months,” Kim Hak-hyun, manager of a Cartier shop, said.