Three stowaways make it to U.S. from Incheon

Three stowaways make it to U.S. from Incheon 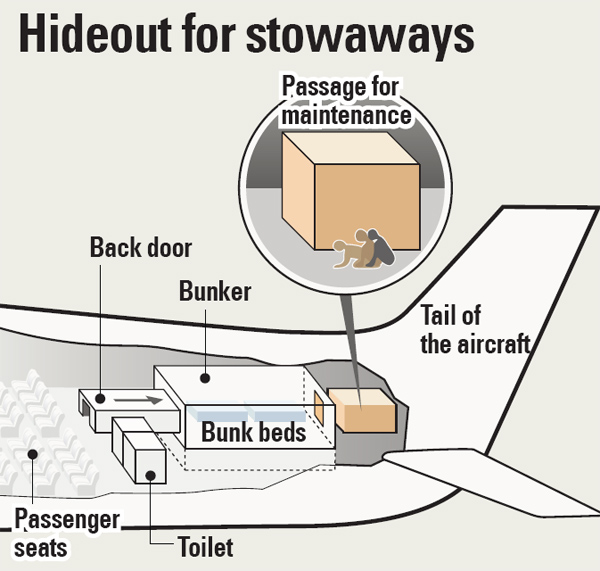 Three Chinese stowaways were caught trying to pass through customs in Los Angeles after sneaking onto a Korean passenger plane departing from Incheon International Airport, revealing a glaring hole in airline security here.

Korea’s Ministry of Land, Infrastructure and Transport said Monday that three Chinese women were caught by U.S. Customs and Border Protection attempting to sneak past authorities at Los Angeles International Airport on March 29. The women in their 20s and 30s earlier snuck aboard an Asiana Airlines plane and hid near the crew’s rest area at the back of the aircraft for the duration of the flight.

The Boeing 747-400 jet airliner’s crew rest area is furnished with bunk beds, and flight attendants take turns resting there. The stowaways apparently concealed themselves behind the back door in the corridor outside the bunker or in the gap between the top of the bunker and the ceiling of the aircraft.

The duration of the flight from Incheon to Los Angeles was a total of 10.5 hours, but the plane previously made stops in Hong Kong and Japan, which brought the total time of hiding in a cramped space up to 30 hours.

Some officials speculate that the Chinese women might have also connected in Vladivostok, Russia.

Even though the aircraft undergoes maintenance and cleaning after each landing and the crew frequented the bunker, taking turns to rest, the stowaways were not discovered.

U.S. Customs currently are in the process of investigating the three women who did not have entry visas.

But officials have not yet confirmed how, when and where the Chinese women snuck onto the plane in the first place, especially how they knew the detailed flight schedule and the location of the bunker, usually not known to the public.

Officials point out it would have been difficult to get to the bunker in the back of the plane without attracting any attention.

One airline worker stated, “There is a likelihood that they first bought airplane tickets legitimately and boarded and then in the middle of the flight snuck into the rest area.”

Because of their meticulous knowledge about where to hide, some experts point out that the stowaway plan was likely the work of a professional broker.

U.S. Customs notified Asiana Airlines of the security breach, and the airlines conducted a thorough inspection of the plane when it returned back to Incheon and found traces of the stowaways in the rest area.

An Asiana Airlines representative stated that it is currently awaiting the results of the U.S. Customs and Border Protection’s investigation. The Transport Ministry stated that following the U.S. Customs report, it conducted two separate emergency inspections of the security of Asiana and Korean Airlines’ aircraft, especially in the rest area.