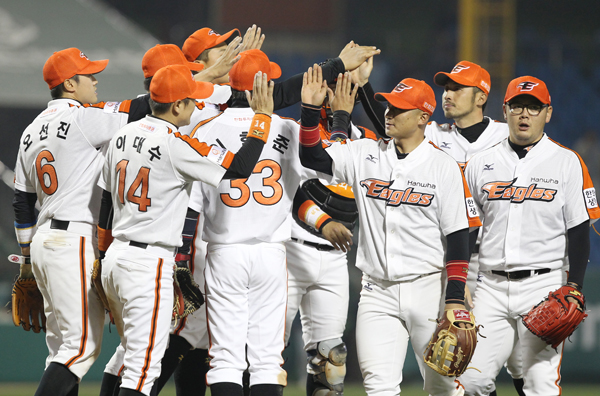 Hanwha Eagles players celebrate their first win of the season after beating the NC Dinos, 6-4, in a Korea Baseball Organization game Tuesday at Daejeon Hanbat Baseball Stadium in Daejeon. By Jung Si-jong

The Eagles rallied from behind to beat the NC Dinos, 6-4, at home in Daejeon on Tuesday, stopping their losing streak at 13 games. The matchup featured the Korea Baseball Organization’s two weakest clubs.

The 13th-straight loss since the team’s season opener on March 30 was already the longest opening losing streak in the league’s 30-year history. The Dinos, who began their debut season with a seven-game losing stretch, were two wins ahead of the Eagles.

It was the first victory in 3,117 days for Kim, 71, since the legendary manager was at the helm of the Samsung Lions in 2004. Kim, who returned as a manager after an eight-year hiatus, added his 1,447th victory to an already impressive resume as the league’s winningest manager.

He led the Haitai Tigers, the predecessor of the Kia Tigers, to the championship nine times, then managed the Lions to the Korean Series title in 2002.

The manager had never been known for expressing his emotions, but after Tuesday’s victory, he was seen with tears welling up in his eyes. He didn’t mention it first when reporters asked about the tear, but then he said, “It is worth crying.”

“Having lost so many games, I realized once again what a sport baseball is,” said Kim, who was entrusted to resuscitate a team that finished last in three of the past four years but had to see it struggle more than before. “I won’t forget this victory of today for the rest of my life.”

The Eagles’ worst struggle in years comes partly from the departure of Ryu Hyun-jin, the franchise’s ace pitcher for the past seven years. Ryu, who won 98 games for the Eagles, is now pitching for the Los Angeles Dodgers.

Kim initially was against sending away Ryu before the 26-year-old left-hander signed a $36 million contract with the Dodgers in December. He still has regrets about Ryu’s departure.

“Ryu Hyun-jin is really pitching well in the major leagues. I wish he would have gone [to the U.S.] after playing with Hanwha for one more year,” Kim said.

But, he was confident that his first victory with the Eagles will bring along many other wins.

“I couldn’t believe in the beginning that I could lose those many times,” Kim said. “But, I think things will work out well from now on.”

A victory looked obscure in the beginning on Tuesday as the Eagles trailed, 4-0, through the second inning thanks in part to an error by Jung Hyoun-seok in the first inning.

But, the Eagles reduced the deficit by one in the third on a two-run double by Kim Tae-kyun and an RBI single by Choi Jin-haeng. Kim hit a two-run homer, his first of the season, in the fifth to give the Eagles the lead. Lee Dae-soo added another run in the sixth with a double.

Denny Bautista (1-2) got the win after allowing four runs, including two unearned, over five and two-thirds innings. He struck out 11.