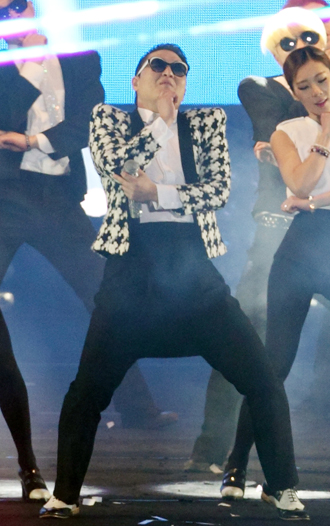 Psy dances while performing his latest single “Gentleman” during his concert at Sangam-dong, western Seoul on Saturday. [NEWSIS]

Psy has done it again. In just four days after releasing the music video for his latest single “Gentleman,” the clip has exceeded 100 million views.

As of 5 a.m. yesterday morning, the video had 101,355,837 views, overtaking Susan Boyle from “Britain’s Got Talent” for the title of quickest route to 100 million hits.

According to YouTube analytics, on the first day “Gentleman” amassed 24,180,000 views. Surprisingly, the majority of those views came from the United States.

With his follow-up hit, Psy has proved himself as a video star and not just a one-hit wonder. Just days earlier “Gangnam Style” also became the first video to reach the one-billion-views mark on YouTube.

And although it has been raking in a “thumbs down” for every five “thumbs up” from users, the strong reaction seems to be an indicator that it’s still hot.

When comparing the two hits, “Gentleman” seems to be on a better footing as the prequel took some 50 days to get to the same place that “Gentleman” got to in just four days.

The tune that has netizens in a frenzy was scrutinized many times before the video’s release.

At a press conference which took place before Psy’s concert on his home turf of Seoul on Saturday, he said that it was indeed “just a club song,” as many critics had pointed out.

“Whether the song is a hit around the world is not important, what matters is that it’s doing well here,” Psy said just hours before the video’s unveiling at his show. But that was before the world caught a glimpse of Psy’s rendition of Brown Eyed Girls’ “Abracadabra” dance.

Bae Soon-tak, a pop-music critic, said that it was no big surprise that “Gentleman” was a hit.

“Although more subtle than ‘Gangnam Style,’ the chorus is addictive and so is the dance,” said Bae, who added that the video’s strength was that it had easy dance moves that anyone could get right.

“It was probably the best choice that Psy could make,” Bae said. “It’s also important that for videos to do well on YouTube, it’s got to be imitable by fans. You know Billboard started taking YouTube hits into account now thanks to Psy and because of this, I’m sure we can expect some similar results there too.”