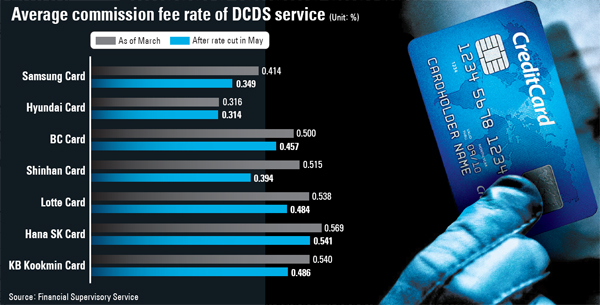 Commission charges imposed by credit card companies on debt cancellation and debt suspension (DCDS) services will be lowered an average of 12.1 percent starting next month, the Financial Supervisory Service said yesterday. The cut in commission is expected to reduce payments by service subscribers a total of 25.7 billion won ($22.9 million) per year.

DCDS services were introduced by Samsung Card in 2005, and since then Hyundai Card, BC Card and other major card companies have joined in. DCDS is a type of insurance service that credit card companies offer customers with commission fees added to monthly bills. Commission fees vary depending on the total monthly card usage and rates fixed by card companies. The service allows customers to suspend payments in event of death or illness.

“Card companies have accepted public criticism that the commission rates are too high compared to the actual compensation given out,” said Cho Young-je, a deputy governor at the FSS.

As of last month, the highest commission rate was imposed by Hana SK Card at 0.569 percent, followed by KB Kookmin Card at 0.54 percent. They each will lower the rates by an average of 5 percent and 10 percent, respectively.

The FSS formed a task force with the Credit Finance Association and Korea Insurance Development Institute to improve card companies’ DCDS services. The joint team found that from January 2005 to January this year, 105,000 subscribers, or 1.9 percent of total DCDS service subscribers, have not received compensation to which they were entitled. The total volume of undistributed compensation was as much as 150 billion won.

If a customer dies, for example, and his or her monthly card payment is overdue, the DCDS service is supposed to allow cancellation of the debt from the time of death. If family members did not know that the deceased had the service, however, companies neither notified survivors nor voluntarily provided compensation. Typically, the family continued to make payments.

From now on, the FSS said, credit card firms will be advised to regularly check on the status of subscribers via information disclosed by the Korea Federation of Banks and inform families of the DCDS service.

“We will also have the [Credit Finance] Association upload and compare commission rates on its Web site [starting in May] so customers applying for the services are able to compare costs,” Cho said. “Such a move will lead card firms to lower rates.”