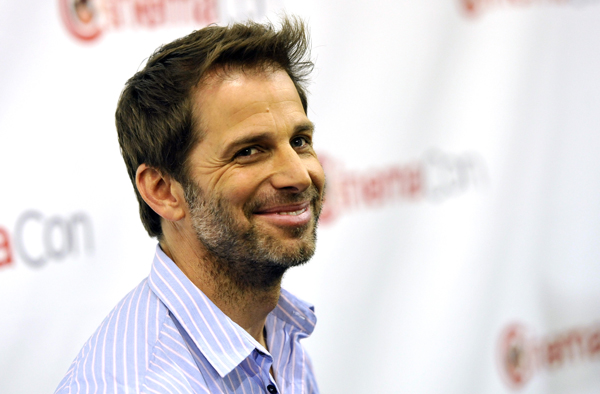 LAS VEGAS - Zack Snyder is hoping his Superman reboot “Man of Steel” turns out to be not just a blockbuster, but a movie with a capital “M.”

There are panoramic aerial battles on Krypton, there are touching moments between young Clark Kent and both his biological and adoptive fathers, there are close-ups of a fist pounding into ice, and there is lots and lots of big-budget flying.

“I wanted the movie to be a big movie-going experience, full of action, full of emotion and full of the biggest super hero in the world,” Snyder said Tuesday before giving the Las Vegas movie theater convention CinemaCon a brief glimpse. “I wanted to give to the cinemas of the world a big, giant ‘movie’ movie.”

The film follows in the modern tradition of the naturalistic superhero movies. It takes place in a gritty-looking, color-drained world of grays, brown and icy blues. All the better to set off that red cape, perhaps.

The scenes of Clark Kent’s Kansas childhood are drenched in Americana, complete with freshly laundered flannels flapping on the clothes line.

Snyder, who also directed the superhero film “Watchmen,” said he wanted to find a poignancy to add to the familiar story.

We get some hints of that tenderness in conversations between Kent and his farmer father, played by Kevin Costner, as they struggle to keep the young superhero’s powers hidden.

But then we see Kent grow up, learn to fly and begin to take on an assortment of foes. It’s this part of the legend - not the troubled childhood - that seems to most animate Snyder.

“I’ve been a big fan of the character my whole life,” he said. “He is the greatest super hero. There’s no competition between super heroes, but if there was, he’d win.”The new franchise is anchored by Henry Cavill, a British actor who starred on the Showtime series “The Tudors” before taking on the mantle of the man of steel. His is the only chiseled face in the trailer not instantly recognizable as a mega-star.

Snyder and Warner Bros. appear to be enjoying teasing fans with snippets of the film, which hits theaters at the height of blockbuster season on June 14. AP