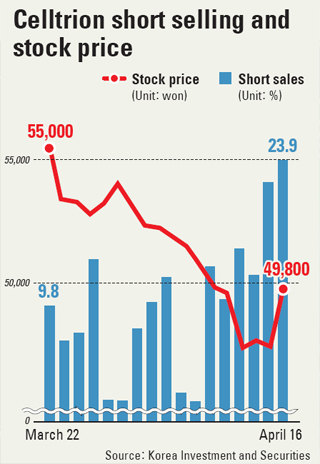 A group representing minority shareholders of Celltrion has urged financial authorities to clamp down on short-selling as Kosdaq’s No. 1 company by capitalization is suffering indiscriminate attacks.

“We have submitted complaints to the Financial Services Commission several times, pleading to arrest short-sellers,” said Lee Jae-chil, head of the group, yesterday at the Korea Exchange. “If the financial authorities don’t take appropriate action, we will sue them on charges of dereliction of duty.”

Lee emphasized that minority shareholders are not asking the government to interfere with the depressed stock price of the biopharmaceutical company.

“We’re requesting that the government apply legal measures against investors who paralyze the normal function of the stock market,” he said.

Lee said the company has suffered from attacks of short-selling for the past two years made possible by loopholes in financial regulations governing short-sellers. He said he suspects foreign hedge funds are behind the massive short-selling of the company.

“Celltrion’s sale to a multinational drugmaker would be a boon for many individual investors but a huge loss to the country,” Lee said. “Celltrion would become a mere production base and all gains, including dividends of the company, would end up in the hands of foreign shareholders.”

Yesterday’s press conference came a day after Celltrion President Seo Jung-jin made a surprise announcement that he will sell his controlling stake in Celltrion and its affiliates by seeking a buyer among multinational drugmakers.

He cited predatory short-selling as the main reason behind the move.

A short-sale is when a third party sells stock with the intention of buying it back at a lower price, profiting on the stock’s loss.

Seo has said he will begin process of finding a buyer in the first half of the year as the company is expected to get European Union approval for its antibody drug Remsima between next month and June.

In a separate but related matter, Celltrion yesterday appointed JP Morgan as the lead underwriter for selling Seo’s stakes. The two sides will meet next week for further discussion, as some companies have expressed interest in acquiring Seo’s stake.

Financial authorities said they are considering a ban on short-selling individual stocks in the second-tier Kosdaq market.

The current regulation governing Kosdaq states that financial authorities can ban short-selling only when there’s concern that it could destabilize the market.

So far, financial authorities have banned short-selling only in a specific sector; there is no precedent for a ban involving an individual Kosdaq-listed company.

When short-sales exceed 3 percent of total stock transactions for 20 days or more, financial authorities can ban short-selling of a specific stock.

“Currently, the Korea Exchange is looking into whether there’s a need to impose a ban on an individual stock item,” said an official at the FSC. “We will discuss the matter with Korea Exchange once it finishes its own analysis.”

The Financial Supervisory Service said it has beefed up monitoring of Celltrion short-selling to determine whether groups of investors strategically initiated short-sales of the stocks hoping to rake in a bonanza.

“At least five foreign hedge funds may have enjoyed share price gains of Celltrion by spreading negative news about the company after taking advantage of low market confidence on biotech shares,” said an employee at a local asset management firm.

According to market observers, Celltrion suffered from a surge in short selling after rumors began to spread about window dressing of accounts and clinical testing failures since April 2011. Such rumors circulated every April before the release of its audit reports.