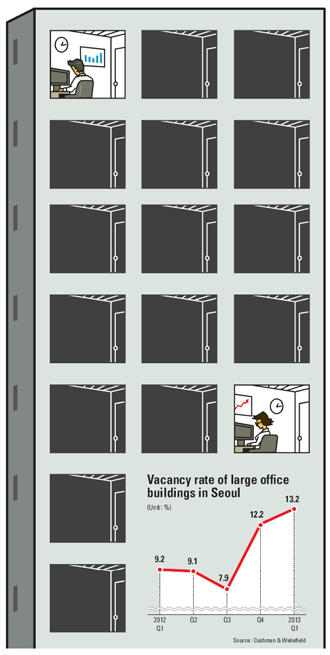 Mr. Kim, 45, is a manager for a 12-story office building in Gwanghwamun, central Seoul, who says he sleeps fitfully these days because three floors of office space have been vacant for more than six months.

“Sometimes prospective renters come and look around, but their requirements, such as extending rent-free periods, are too picky, so it is difficult to sign a contract,” Kim said.

But the vacancies are not the only problem for Kim. Because many large office buildings were constructed in Seoul in recent years, vacancy rates have gone up and rents have gone down.

According to data on Monday from Proper Tree, a real estate consulting firm, the vacancy rate of Seoul office buildings of 33,000 square meters (355,209 square feet) or more was 14.1 percent.

The figure is not so different from that of global real estate service firm Cushman & Wakefield, which put the vacancy rate in this first quarter at 13.2 percent, a percentage point more than the previous quarter.

The vacancy rates in Gwanghwamun (18.5 percent) and Yeouido (15.2 percent), where many large buildings are located, were higher than in other regions.

Just in the past two years, the Ferrum Tower (28 floors), Center 1 (32 floors), K-Twin Tower (16 floors), State Tower (23 floors) and Asterium Seoul (11 floors) were built in Seoul. In the Yeouido area, the first (32 floors), second (29 floors) and third (55 floors) buildings of the International Financial Center were built in the past year, and in July, the 55-story Federation of Korean Industries building is scheduled to open.

“Office buildings that began construction around 2007 when the property market was booming have been completed, and are looking for renters at about the same time, but there is insufficient demand,” said Tony Yoon, a senior director at Cushman & Wakefield Korea.

Return on investment (ROI) is also falling. According to data from Ministry of Land, Infrastructure and Transport, annual ROI for office buildings in Seoul averaged 5.55 percent last year, which was 1.42 percentage points less than 2011. ROI was about 6 percent in 2009.

And for those trying to lease space, the problem is going to get worse before it gets better, with more buildings set to open.

According to the Construction Research Institute of Korea, 21.5 percent more buildings are scheduled for completion this year than in 2012.

“The sluggish economy is continuing, but the supply of large office buildings, such as Lotte Super Tower in Jamsil, is likely to increase until 2016,” said Doo Seong-kyu, a researcher at the institute. “It seems that a continuing increase in vacancy rates and decreasing return on investment is inevitable.”