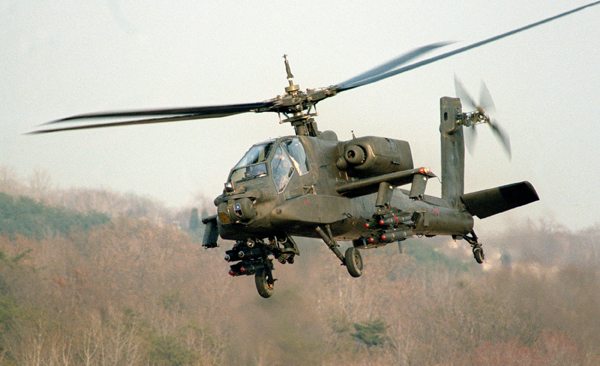 Nicknamed the “tank killer,” the Apache Guardian is evaluated as the deadliest helicopter in the world.

“If a large-scale attack helicopter is dispatched, it can assist the aging attack helicopters in operation,” a South Korean Ministry of National Defense official said. “It can also promptly respond to any surgical strike by the North Korean army or its armored brigade.”

“The committee for defense acquisition program [chaired by Defense Minister Kim Kwan-jin], which is in charge of the final decision on procurement of military equipment, finally selected the Apache based on its capability and suitability for operation.”

The large-scale helicopter acquisition project cost 1.8 trillion won ($1.6 billion) of state funds to procure a total of 36 attack helicopters by 2018.

The winner - Boeing AH-64E Apache Guardian - is an upgraded version of the AH-64D Apache Longbow, which the U.S. military currently uses.

“The Apache Guardian has an enhanced capability of engine power transmission, and a better radar system to detect a target,” an official from the South Korean procurement agency said on the condition of anonymity.

“The U.S. military is also in the process of upgrading its 690 Apache Longbow choppers to the level of the Apache Guardian or procuring new ones.”

Basically, the Apache Guardian is loaded with 16 Hellfire guided missiles, 76 70-millimeter caliber rockets, and 1,200 30-millimeter machine guns. The missiles are capable of striking a total of 16 different targets located 8 kilometers away within 27 seconds.

Particularly, its radar system, called the Longbow Radar, is able to detect 256 targets at maximum within its radius of 50 kilometers simultaneously, after analyzing whether the targets are friend or foe and what kind of weapons they are - tank, artillery or military-owned vehicle. It can work around the clock, regardless of the weather.

The contract regarding the Apache Guardian includes technology transfer regarding military helicopters from the U.S. to the South.