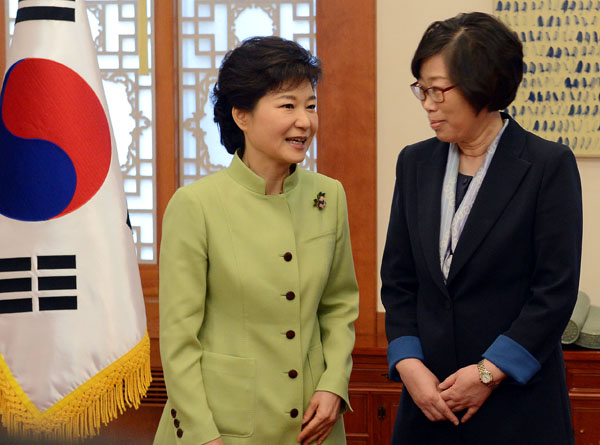 President Park Geun-hye yesterday went ahead and appointed a disreputable researcher to head her maritime ministry despite considerable public skepticism over her ability to perform the job, throwing cold water on the recently restored relationship with the main opposition party.

Park yesterday formally appointed Yoon Jin-sook, head of the Marine Policy Research Division at the Korea Maritime Institute, as her minister of oceans and fisheries.

Although Park finally completed her cabinet with the appointments of two ministers, 52 days after inauguration, her decision to keep the unpopular Yoon resulted in fierce criticism from the public, the main opposition Democratic United Party as well as her own Saenuri Party.

Park Yong-jin, DUP spokesman, said the opposition party felt slapped in the face, despite its efforts to cooperate with Park. “Appointing Yoon, despite the protests of the ruling and opposition parties and the people, is a dangerous act, not only disturbing her relationship with politicians but also triggering an explosion of public rage.” Representative Park Ki-choon, floor leader of the DUP, also warned that the president will have to live with her choice for a long time, calling the appointment of Yoon “the ultimate finishing touch” on Park’s series of botched appointments.

The 57-year-old oceanographer was named to head President Park’s ambitious projects in the new Ministry of Oceans and Fisheries on Feb. 17.

After her confirmation hearing took place earlier this month, the lawmakers fiercely protested the nominee, questioning her ability.

While lack of ethics concerning wealth, draft-dodging, plagiarism and other irregularities has been a frequent stumbling block for many nominees, it was rare for representatives to question a nominee’s basic ability to perform a job.

At the confirmation hearing, Yoon failed to answer many basic questions about the ministry’s operations, and lawmakers questioned if she was ready for the job.

As lawmakers criticized her poor preparation because she had months to get ready, Yoon said, “I, at first, told the president that I am not qualified for the job. I told her that a capable, politically powerful person should lead the ministry because it will be relaunching.”

Five years ago, the Lee Myung-bak administration shut down the Maritime Ministry.

Park decided to bring it back with the new name the Ministry of Oceans and Fisheries.

Video clips of Yoon repeatedly telling lawmakers “I don’t know” with laughter went viral on the Internet, giving her the nickname “Minister Ignorance.”

The party, however, pressured her to go the extra mile to put people’s concern about her ability to rest, rather than criticizing the president for insisting on the unpopular nominee.

“It is undeniable that many people are skeptical about Yoon’s abilities,” Representative Lee Sang-il, Saenuri spokesman, said.

“Yoon’s attitude at the confirmation hearing was extremely disappointing. She displayed a lack of understanding of the ministry’s operations and failed to present her vision.” Lee said it is worrisome for Yoon to lead the large-scale ministry with about 14,000 civil servants and create a stepping stone for Korea to become a maritime power.

The appointment quickly soured the latest efforts between the Blue House and the largest opposition party to restore their relationship.

Park invited DUP leaders to the Blue House twice on Friday and Tuesday to seek their cooperation but went ahead and appointed Yoon yesterday despite the DUP’s strong push to abandon the nominee.

The president, however, defended her choice by saying Yoon was a talented expert.

Park also told lawmakers that Yoon was a rare woman specialist in the field and that her gender was also a factor.

Yoon is one of the two women chosen by Park to join her cabinet, along with Gender Equality and Family Minister Cho Yun-sun.

“The appointment reversed all the efforts to improve communication,” said Representative Yun Kwan-seok, spokesman of the DUP.

“From now on, the Blue House and the president will have to be responsible for the fallout.”

The administration needs to cooperate with the legislature on several urgent issues including the plan to draw up more than 19 trillion won ($17 billion) of supplementary budget.

Yoon’s inauguration ceremony took place at the Ministry of Oceans and Fisheries later in the day.

After the ceremony, she met with reporters and said she will try to work out her ruined relationship with the legislature, adding that she has no intention to fight the lawmakers.