Busan facility can recycle just about anything

Busan facility can recycle just about anything 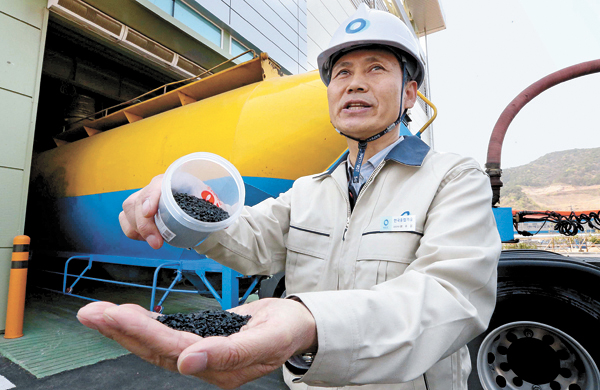 At the Saenggok recycling plant in Busan, sludge is transformed into black bean-size solid fuel energy, which is sold to thermoelectric power plants and cement factories. By Song Bong-geun

At the Saenggok eco-recycling plant in Gangseo District, Busan, combustible waste is turning into another source of fuel energy.

When the JoongAng Ilbo visited Busan E&E April 9, trash was moving on a long conveyor belt to dry, which would then be used as fuel for a power plant located next to the plant.

The eco-recycling plant burns 900 tons of trash for a period of 16 hours a day, generating 25 megawatts of electricity per hour.

The garbage that usually is buried in a landfill generates nearly 25 billion won ($22 million) worth of energy a year through the recycling process.

Saenggok eco-recycling center is the largest in the country at 1.16 million square meters (287 acres).

The Busan Metropolitan Government invested 20.24 billion won to further upgrade the facility, which was built in 1994.

At the complex are seven recycling facilities, some of which are in full operation while some are partly operational.

Each facility sorts out what could be recycled to be used as fuel with conveyor belts.

It is estimated when the seven facilities are in full-swing, 47.27 billion won worth of energy is expected to be produced.

Five of the seven recycling facilities are run by private firms, easing the financial burden for the Busan government in managing the complex.

One of the seven recycling facilities melts vinyl waste and turns it into diesel.

Busan city explained this recycling process is possible because vinyl waste, such as plastic bags, comes from petroleum.

With the Saenggok recycling center in full operation, 69.4 percent of 1,810 tons of daily waste produced from Busan will be recycled as fuel energy while the rest, 553 tons of garbage, will be buried in a landfill.

Busan is also using methane gas produced from its landfill as fuel for its power plant.

The city collects the gas through pipelines and wells installed at the landfill to extract the gas, which can produce 6 megawatts of electricity an hour through the recycling process.

“We have a firm principle that there is no waste that can’t be recycled,” said Kim Byung-gon, director at the environment office at the Busan city government.

“With that principle in mind, we will continue to find ways to increase recycling capacity.”

The eco-friendly energy plant is getting noticed. Foreign officials are now coming to view it to see if they can replicate the feat in their countries.

Last year, around 300 foreign officials from five countries, including Saudi Arabia, visited the recycling plant to learn how they do it.

More than 12,000 local government officials and students also came to the center to see how it turns garbage into valuable sources of energy.