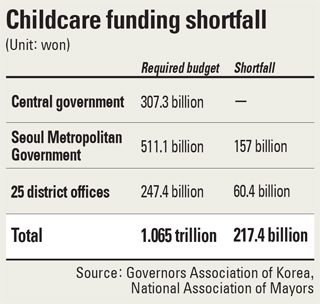 “We ran out of money, and now I am worried that the office can’t pay out subsidies,” the 35-year-old official said.

With the central government’s decision to pay 100,000 won to 200,000 won ($179.6) in child care subsidies per month for all toddlers under 5, regardless of income level, many local governments find it hard to secure funds for the new plan.

The total cost of the new welfare program in Seoul is estimated at 1.065 trillion won.

For the entire fund, the central government is supposed to pay 307.3 billion won, while the Seoul Metropolitan Government should cover 511.1 billion won and local district offices 247.4 billion won.

Some of the districts express concerns over a worst case scenario where they cannot pay out the promised subsidies.

“We desperately need the government’s support,” he said.

The revised bill would see the central government providing 40 percent of the funding for welfare programs in Seoul, an increase from 20 percent, and also an increase of 70 percent of funding from 50 percent in the remaining regions in the country.

The proposed bill, however, is pending and hasn’t been discussed at the National Assembly.

“The revision bill should be passed before the Ministry of Strategy and Finance issues a fiscal guidance memorandum to each department,” said Kim Gwan-yong, governor of North Gyeongsang Provincial Government and head of an association that represents governors nationwide.

“We call on the government to pass the bill within this month,” he said.

Despite the escalating concern, the Ministry of Health and Welfare takes a somewhat circumspect attitude to the calls.

“It doesn’t seem that the regional governments and district offices have tried their best to secure enough funds, thinking that the central government will support them,” said Lee Sang-jin, an official at the ministry.

“Anyway, there won’t be a case where the offices fail to pay the subsidies under any circumstance,” the official said.