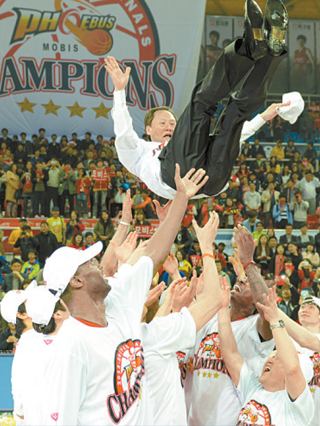 The Phoebus crushed the Knights, 77-55, in the fourth championship game at the Dongchun Gymnasium in Ulsan. The Phoebus beat the Knights, 68-62, on Tuesday, after winning the first two games over the weekend, 60-58, on Sunday and 76-71 on Saturday.

It was the third championship for the Phoebus, who won titles in the 2006-07 and the 2009-10 seasons. The team’s predecessor, Busan Kia Enterprise, won the championship title in the inaugural KBL season in 1997.

The Phoebus, which finished as the regular season runner-up, three games behind the Knights, won its last 20 games through the championship series. The Phoebus also swept the second playoff series with the Incheon ET-Land Elephants 3-0.

“Even I can’t believe that we won 20 straight times,” Phoebus head coach Yoo Jae-hak told reporters after winning the latest title. Yoo is now the league’s winningest coach. Along with Shin Sun-woo and Jun Chang-jin, Yoo has three champion titles, all with the Phoebus.

“The players have done an amazing thing,” Yoo said. Yoo particularly praised Phoebus guard Yang Dong-geun, who led the home team with 29 points in Wednesday’s game. After the game, Yang garnered unanimous votes to become the postseason MVP. It was his second postseason MVP award since 2007. He averaged 14.3 points, four rebounds and four assists in the four games against the Knights.

“Honestly, I didn’t think that I would be the MVP,” Yang said.

It was a painful loss for Knights head coach Moon Kyung-eun, who wanted to wrap up his debut season as a manager with a title.

Yoon was an assistant coach at Yonsei University in 1994 when Moon, then a Yonsei senior, led the Seoul college to win the Basketball Festival. “Yoo has done it great,” Moon said. “I was just a novice before him. I am sorry that we couldn’t win once.”