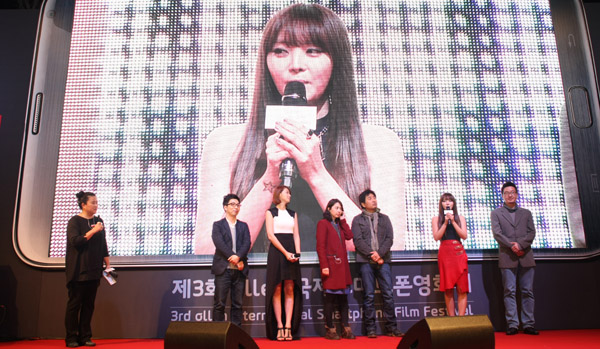 A smartphone and an imaginative mind are all that a budding filmmaker needs - or so KT seems to think.

The Olleh International Smartphone Film Festival kicked off Wednesday and will run until tomorrow at Megabox COEX.

All 25 amateur clips to be shown were filmed using smartphones and are 10 minutes or less in duration.

The pieces, picked out of more than 700 entries, show what ordinary people can do while trudging through life with a smartphone in their hands.

Plots range from a tale of teenage lesbians who split up to an abandoned dog that reminisces about happier times.

An idol singer, an international actress and an American film critic all participate.

On opening night, Lee Joon-ik, director of the executive committee, commented on the festival’s point of difference.

“It used to be that you had to learn filmmaking to become a director,” he said. “But times have changed, and anyone can be a filmmaker. .?.?. It is our dream that everyone will become a filmmaker.”

To drive the point home, the opening film was “Drawing Paper,” shot specifically for the event and created in part by students from five remote towns around the nation.

With the help of director Bong Man-dae, the students delved into the topic of dreams and ambitions. Complete with bloopers and shaky camera work, the amateur project captured the essence of the festival perfectly. 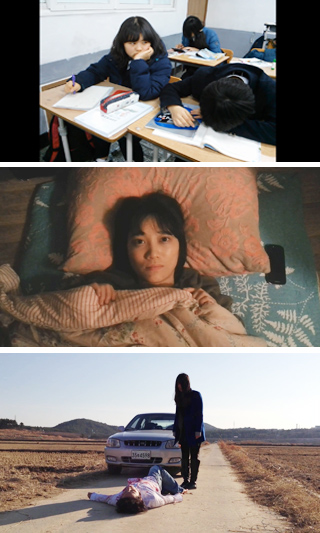 From top: The amateur films “A Happy Letter” by Jeon Ha-ri, “Between Him and Her” by Lee Gwang-jin and “Dances with Misses Kim” by Yang In-chul are three of 25 finalists in this year’s Olleh International Smartphone Film Festival. Provided by the festival

KT President Pyo Hyun-myung was also on hand to impart his vision for the coming years.

“This year, we’ve had 130 teens make submissions, tripling the amount from last year,” he said in a speech that emphasized KT’s goal of helping young people tap into their creativity.

As part of these efforts, the company launched a mentor school for film buffs.

Three female entertainers got on board for the project under the supervision of three homegrown directors. Japanese-American writer and actress Ayako Fujitani, Brown Eyed Girls’ Narsha and actress Yoo In-young participated.

With the help of director Lee Ho-jae, Narsha used a Galaxy Note 2 to shoot her piece, called “The Bug.”

And although “not particularly creative or inventive,” Narsha said it was special to her because it was her story.

“Through the attempt, I also learned how fun filmmaking can be,” she said.

Narsha’s positive experience has encouraged her to boost next year’s event so that more people attend and submit videos.

As the festivities continue today, there will be a workshop on filmmaking via smartphones as well as screenings of “Mentor School.”

Tomorrow, one submission will be crowned Best Film, while others will be acknowledged for best directing and acting within the domestic, international and youth categories.

The Audience Award, determined by votes from views, is new this year and will be presented based on the results of online voting that ended yesterday.

Fans were able to watch submissions on KT’s Web site and Olleh TV ahead of the event to determine their votes. The winner of the Grand Prize, as picked by judges, will claim 10 million won ($8,895).

Other prizes range from 1 million to 5 million won and a Samsung Galaxy Note 2.