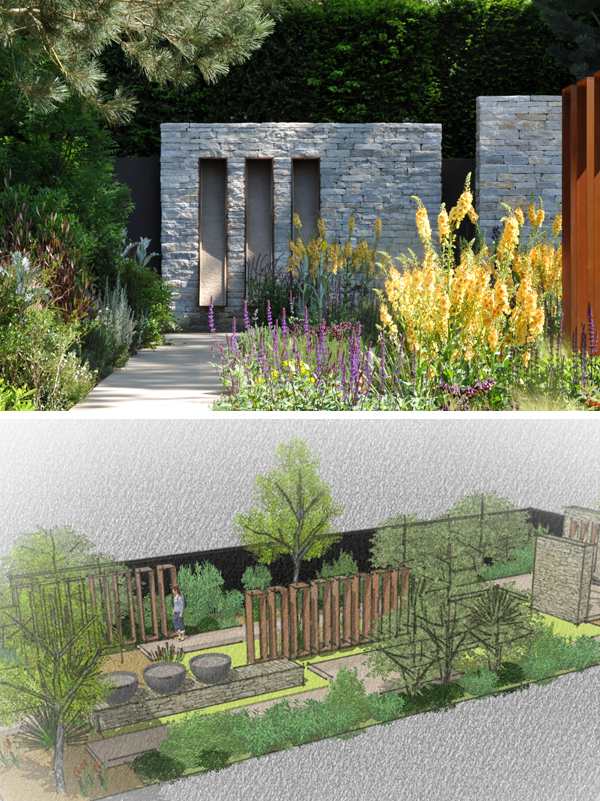 British garden and landscape designer Andy Sturgeon is a firm believer that through gardens and landscapes, we can make the world a better place and help people lead more pleasant lives.

Sturgeon, who was raised just outside southwest London and now lives in Brighton, England, grew up helping his parents with gardening as they were amateur gardeners.

With a resolute, yet vague liking toward nature and outdoors, he studied tropical plants and indoor landscaping at the Welsh College of Horticulture. And today, he is one of the world’s leading garden and landscape designers, with over 30 international awards to his name.

Sturgeon was in Korea in March to create a unique English-style garden for the Suncheon Bay Garden Expo that will kick off its six-month run Saturday in Suncheon, South Jeolla. The expo is Korea’s first garden expo.

The 47-year-old says he gets most of his inspirations from his interest in people, just the way that the world fits together, as well as current affairs.

The 300-square-meter (3229-square-foot) show garden he created in Suncheon is also based on his life experiences.

The designer says while he tends to emphasize hard landscaping, structures and architecture in his gardens, he always tries to make gardens that are “timeless,” thereby opting for natural materials such as stone and wood, instead of “new materials” that are shiny, metallic, glass and plastic.

Over the last 20 years, Sturgeon has created many works around the world - small and large, public and private. Yet, when asked if there was still a project he’d like to do, he said he envisions to create “a large park that will change people’s lives.” 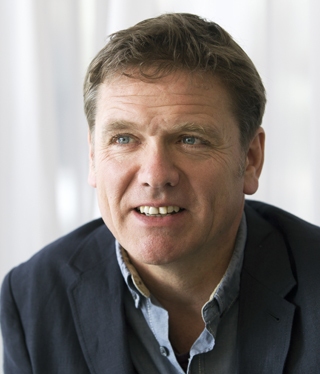 He added that he finds the most satisfaction when he creates “something” where there was nothing initially - making it a new place, a place where people go to meet each other and share an experience.

The Korea JoongAng Daily sat down last month with Sturgeon - who is also an author, freelance journalist and broadcaster, to talk about his work in Suncheon and much more.

Q. First, what can you tell us about your work at the Suncheon Bay Garden Expo?

A. It’s a metaphor for life. The idea is when you come into the garden, you have a number of choices. Once you’ve committed to one of those choices, you have to follow it all the way through. And as you journey through the garden you can look through and see the other path and what you might have experienced had you taken that route. But you can’t get through to it.

The journeys are slightly different depending on which way you go. But the idea isn’t that one way is better than the other way. It’s just that life is different and it presents different opportunities to you. In fact, all paths lead to the same destination. At the end of the garden there is the courtyard with water. And it’s something like a sanctuary. So it’s a reward for what you’ve experienced in life.

Where did you get your inspiration for such an idea?

I suppose it’s an accumulation of ideas and things that have happened to me in my life. When I left school, I didn’t know what I wanted to do. And I became a gardener almost by accident. I didn’t make a very active choice. It wasn’t until I was in my late 20s that I started to realize that I could make choices and I could control my life.

In the last few years, I traveled all over the world to do garden design and the fact that I can do that as a gardener I find amazing. So it’s the result of all these choices. If I hadn’t started to take those decisions, then I wouldn’t be doing this. I’d be looking after a garden amongst the grass back in England. So it’s really about that. I consider myself very lucky. So it’s also about the recognition of that.

When I was at school, I was very interested in nature - mostly animals, to be honest - but it was also being outdoors. I was very active, doing lots of outdoor sports - climbing, walking and kayaking. So I was in the countryside a lot, in touch with nature. And I was interested in design. But I didn’t really know what to do.

My brother was a landscape gardener, so he was making gardens. And that’s how I accidently got a job working with him. And I very soon realized that I really like doing it. It was a combination of everything I liked. It was about being outside, it was doing something being fit and very active, it was to do with nature and I was making something. It was very satisfying and I could stand back and look at what I’ve done at the end of the day.

There are a few things. One of them is our climate. We are very lucky because we can grow a huge range of plants. It’s because our winters aren’t as cold as they are here and our summers aren’t too hot. So it means we can grow just a really big range of plants - I think bigger than anywhere else.

And our heritage is such that we’ve collected plants from all around the world. In the 18th and 19th centuries everybody traveled in Europe, so our gardens are a combination of lots of other people’s ideas - not just from England, but from Italy, France and so on. We brought all these ideas back and we picked the best’s best.

And the third thing is that the English are obsessed with gardens so they spend so much time and money on that, which other countries, don’t. [Why so obsessed?] I don’t know - something in our DNA. We are obsessed with the physical act of gardening, growing things.

It must be a challenge when working overseas as you have to work with a local planting palette. What are some of your most memorable overseas projects?

The theme of the show was world peace. So I made a garden that was demonstrating several things: I had pairs of walls which had these metal “arms” reaching out toward each other. And where they met, it was a tree - which is the symbol of hope and peace.

So it was about warring nations, or two people arguing or whatever it might be meeting and embracing. And the journey through the garden was also up and down and left and right - it was a difficult route. And the water was swirling around, like the turmoil, unrest and unhappiness around the world.

It’s a very interesting thing for me to go overseas because the things that people like aren’t what I’d expected them to like, trying to understand why that is and what makes people tick - that’s part of the excitement for me, what makes people different.

The thing with the world now is that a lot of places you go, it’s the same. You can travel a long way and see things you know - McDonald’s, Starbucks. But in this part of the world [gardening culture], people do think differently. It’s refreshing.

Lastly, what do you think gardens mean to mankind?

Often it’s subconscious, but I think it’s just about connecting people with nature - which is something that we all have inside us. But I think we lose that connection, especially if you live in the city where you are not so aware of the seasons and wildlife. I think gardening just puts you back in touch with it. And I think that’s important to your soul.

Part of the joy of gardening that most people find is the idea of sowing some seeds and watching them grow. It’s almost like an explanation of what life is about - the cycle of life. Something grows, it makes some seeds and it dies - that kind of circle. I think it’s something that we need to be reminded of.