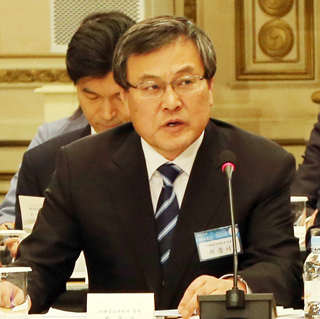 However, many of the projects were seen as ambiguous and unrealistic, while some are considered a repeat of past administrations’ plans. This is triggering concern that the largest ministry of the Park government could be reduced to an ineffectual branch seeking elusive goals.

The Future Planning Ministry is the brainchild of Park, and “creative economy” is catchphrase of her administration. It often has been called the “dinosaur branch,” because its functions combine those of the former administration’s science and technology ministry, knowledge economy ministry and Korea Communications Commission.

According to the ministry, the most important task is to lay the foundation for a creative economy.

Park has emphasized that a creative economy requires an environment in which individuals can freely propose ideas and develop them into businesses that earn money and provide jobs.

As for the ministry’s plan to create around 408,000 jobs, some experts expressed skepticism.

“The ministry’s job planning isn’t much different from the previous administrations,” said a venture capital professor at a university, who declined to be named. “The key to job creation is to make decent jobs that actually earn money, but about 70 percent of venture capital initiatives shut down within three years. So the government’s plan to create jobs in the ICT area is likely to be ineffective.”

“Even if ICT jobs are created, the quality of those jobs won’t be guaranteed,” said an employee at a software developer in Seoul. “The ministry announced that it will create a new environment for creative economy, but what they say is hard to understand because they have no specific plans yet.”

Adding to supporting venture capital with existing policy measures, the ministry said it will increase policy support for talent in the science field, encourage closer ties among industry, research institutes and academia, discover new markets and demand for technology and expand protection and financial aid for intellectual property.

Specifically, the ministry plans to set up a technology licensing office to provide small enterprises with needed technology.

It also plans to run a “software bank,” where small businesses can assess and exchange software.

The ministry’s plan to provide financial support for start-ups and ICT venture capital is nothing new, which deserves criticism.

“The ministry’s plan seems unrealistic because it doesn’t take into account cooperation with the market and businesses,” said the head of a private start-up foundation. “Rather than providing unilateral policy and financial support, understanding the market is more important.” She added that the ministry has failed to come up with differentiated strategies compared to former governments due to the delay in its formation.

The ministry’s 10 projects to create new converged industries are noticeable, too.

Although the ministry announced it is going to be working on the 10 projects, criticism is likely to follow since the ministry hasn’t done anything apart from giving examples and has set 2017 as the target year to finish.

To help the government ease financial burdens on working-class people, the Future Planning Ministry will come up with a policy to phase in cuts for subscription fees to mobile carriers until 2015.

The ministry plans to make local mobile operators lower mandatory subscription fees by 40 percent this year and 30 percent in 2014 and 2015, respectively. The fees will eventually be eliminated, according to the plan.

Park pledged during her campaign that she would eliminate subscription fees, saying mobile service costs are one of many factors that increase financial burdens on the working class.

The ministry estimates 500 billion won a year would be saved in mobile costs. “As many as 24 OECD countries don’t have such subscription fees for mobile services,” the ministry said.