Chung Chan-woo, vice chairman of the Financial Services Commission, announces a package of comprehensive measures to root out unfair trading practices in the financial market such as stock manipulation, yesterday, at the FSC’s building in Taepyeong-ro, central Seoul. From left is FSC Standing Commissioner Yoo Jae-hoon and FSC Deputy Governor Jung Yeon-su. By Kim Seong-ryong

Financial regulators will be given special investigative rights to directly obtain telecommunications records of people suspected of manipulating stock prices and to impose travel bans on them.

Unfair practices in the financial market include insider trading and stock manipulation.

For example, it is considered a crime when an insider from a listed company with access to internal information sells or advises someone else to sell that company’s shares based on that information.

The FSC will create an exclusive department to investigate unfair financial activities. FSC employees in that department and those from the FSS assigned to the FSC will be given rights as special judicial police.

The set of measures comes a month after President Park Geun-hye during her first cabinet meeting ordered enhanced monitoring of stock manipulation practices.

“With the development of the information technology industry, methods of carrying out unfair trading activities have diversified using clever schemes,” Chung said. “Both financial and judicial authorities made steady efforts to investigate and uncover such practices, but there still have been problems and some limits have been pointed out.” 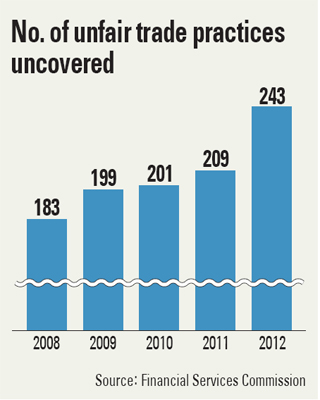 According to the FSC, the number of cases of unfair trade practices jumped from 183 in 2008 to 243 in 2012. Despite the growing number of cases, there has been public criticism that it takes too long for the financial regulator to investigate and punish those responsible.

Currently, it takes more than a year to complete an investigation that involves the Korea Exchange reviewing suspected cases, the FSS investigating and the Securities & Futures Commission deliberating before passing the cases on to the prosecutors.

Other countermeasures include implementing the so-called “fast-track system” that allows prosecutors to launch investigations into unfair practices without having to wait for an investigation to be completed by the FSS.

The Securities & Futures Commission can directly inform the prosecution to launch an investigation.

“If we skip the process [that includes reviews by the Korea Exchange and the FSS], theoretically the whole investigation period will be reduced to about three months from more than a year previously,” officials said yesterday.

The government has also decided to give out higher rewards to those who report suspected cases to the FSS or the Korea Exchange.

By law, the FSS gives rewards of up to 100 million won ($89,125)for tips regarding criminal actions and the Korea Exchange up to 300 million won. Until now, the maximum reward that has actually been given by the FSS was 40 million won. The total amount of rewards that can be given out will now be increased to 2 billion won.